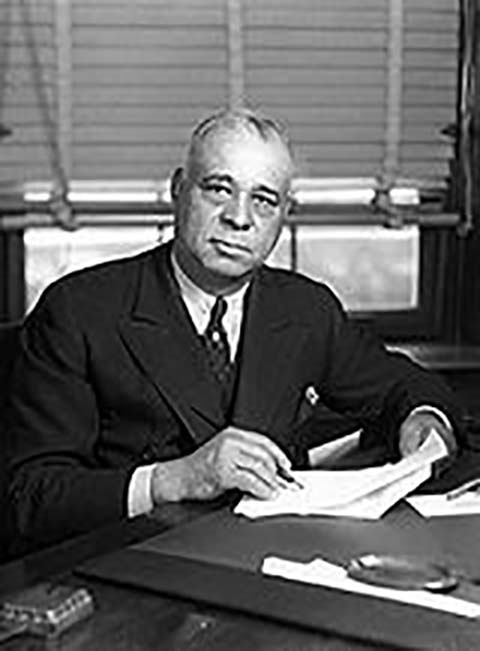 In 1934, Arthur Wergs Mitchell became the first African American Democrat elected to Congress from any state. Mitchell served four terms as a Representative in Congress for the state of Illinois (1935-1943). Mitchell was born near Lafayette Alabama on December 22, 1883 and was educated at Tuskegee Institute, Columbia University, and Harvard Law School. Mitchell founded the Armstrong Agricultural School in West Butler, Alabama, and made his fortune in land speculation. He then moved to Chicago, Illinois specifically to challenge Republican Incumbent Oscar DePriest for Congress in the 1934 election. DePriest who was first elected to Congress in 1928, was the first African American elected to Congress from the North and the first to be elected in the 20th Century.

Mitchell was selected by the Democratic Party as a substitute candidate in Illinois’s First Congressional District when Harry Baker, winner of the Democratic primary, died before Election Day. With that selection he became the first African American endorsed by the Illinois Democratic Party for a Congressional seat who would win his election. Mitchell’s rapid rise within the party was partly because he had the support of Chicago Mayor Edward J. Kelly.

Arthur Mitchell narrowly defeated DePriest in the 1934 election. Although he was African American, his election was seen by many observers as a blow to Chicago’s black community. Mitchell made it clear during the campaign that although, if elected, he would be the only black member of Congress; he felt no obligation to represent other African Americans outside his district. In fact, once elected, Mitchell spent most of his time addressing the needs of white businesses in his district.

Despite his declaration that he represented only the blacks in this district, Mitchell did author unsuccessful bills that made state and local officials accountable for lynchings in their jurisdictions and which outlawed racial discrimination. Mitchell is remember most however, for his victory in the courts when he sued the Chicago and Rock Island Railroad after being forced to sit in a “Jim-Crow” car. He argued his own case before the U.S. Supreme Court and won when the court ruled that the railroad violated the Interstate Commerce Act.

Mitchell retired from the First District Congressional Seat in 1942 and was replaced by William L. Dawson. He then moved to Virginia and became a farmer.

Arthur Mitchell’s election to Congress in 1934 initiated a change in black politics in Illinois and across the nation. From that point and for the rest of the century, black voters would be aligned with the Democratic Party rather than the Republican Party. Arthur Wergs Mitchell died on his Virginia farm on May 9, 1968.