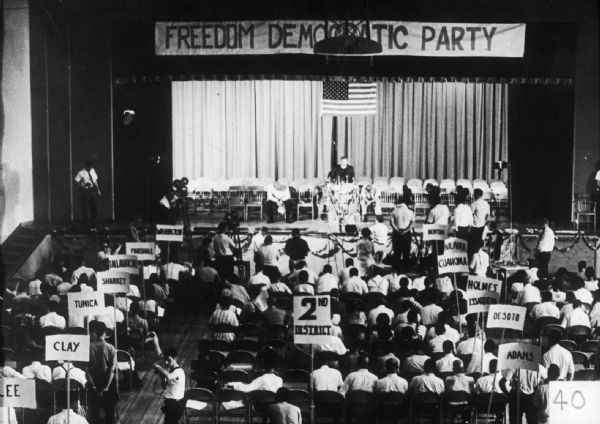 The Mississippi Freedom Democratic Party (MFDP) was founded on April 26, 1964 as part of a voter registration project for African Americans in the state.  For over half a century Mississippi blacks had attempted to attend regular Democratic Party meetings and conventions but were continually denied entry.  They formed the MFDP, which welcomed both whites and blacks, to run several candidates for the Senate and Congressional elections on June 2, 1964.

Attempting to get members to join the MFDP angered most white Mississippians who often responded with violence.  During the Freedom Summer of 1964, three men, Michael H. Schwerner, Andrew Goodman and James Chaney, who were associated with the MFDP, disappeared and were later found dead with fatal gunshot wounds.  The one African American man was beaten so badly for attempting to register to vote that his bones had been crushed.  This defiance by Mississippi’s white majority propelled the MFDP to get its delegates into the upcoming national convention to replace the “regular” Democrats.

The regular Democrats wanted to seat an all-white delegation at the 1964 National Democratic Convention which met in Atlantic City, New Jersey.  The MFDP protested.  Supporters of the MFDP came from all over the United States to support their protest.  Eventually a compromise proposal orchestrated by Minnesota Senator Hubert Humphrey offered the MFDP two non-voting seats next to the regular Mississippi delegates.  However, the MFDP refused the offer because it denied them any chance of voting on the floor of the convention.  MFDP leader Fannie Lou Hamer spoke before the convention rules committee explaining the position of the party and why the compromise offered was unacceptable.

While the MFDP ultimately failed in its goal of gaining seats at the Democratic National Convention, it was ultimately successful as its story in Atlantic City reminded the country of the ongoing battle Southern blacks faced in gaining full citizenship rights.  The Civil Rights Act of 1964, passed two months before the Convention, did not address the right to vote.  African Americans in Mississippi and across the nation vowed to continue to press for full voting rights.  The MFDP’s role in that struggle helped pave the way for the Voting Rights Act of 1965.