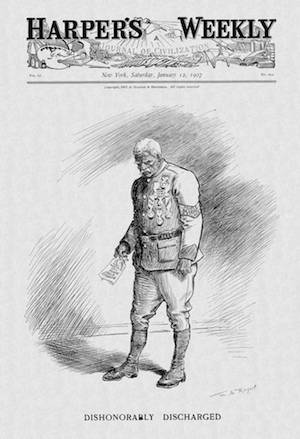 First Sergeant Mingo Sanders is best known as one of the leading figures in the Brownsville Affray in Brownsville, Texas in 1906.  Sanders was a career soldier with the then-segregated U.S. Army’s 1st Battalion, 25th Infantry, when it was posted at Fort Brown, Texas in July 1906.  Born in Charleston, South Carolina in 1857, Sanders as a young boy remembered watching a military parade in his hometown and deciding he would become a soldier.  He enlisted on May 16, 1881 in Charleston and spent his entire career with the 25th Infantry.

Sanders saw combat in Cuba in 1898 during the Spanish American War.  During that brief conflict he once shared his men’s rations with Theodore Roosevelt’s Rough Riders. He was partially blinded on July 1, 1898, when the 25th Infantry came under heavy fire at El Caney.  Capturing the Spanish position there relieved the threat to the Rough Riders and the Buffalo Soldiers of the 10th Cavalry, who then together captured San Juan Hill.  Later when the 25th Infantry was transferred to the Philippines, Sanders took part in the bloody “rush” up Mount Arayat in the Philippine insurrection on January 6, 1900.  Because of his record in the Philippines, Colonel A. S. Burt, the regiment’s commanding officer said, “Mingo Sanders is the best non-commissioned officer I have ever known.”

Within three weeks of the battalion’s arrival in Texas in 1906, between twelve and twenty men, identified by witnesses as black soldiers, shot up adjacent Brownsville, killing one civilian and badly wounding another.  Their motive was thought to be revenge for harassment by whites, who were angry that black soldiers were stationed in their town.  Every soldier denied taking part in the shooting and knowing those who might have, but when army investigations, unable to identify who the shooters were, nevertheless concluded they were soldiers, President Theodore Roosevelt ordered the discharge “without honor” of 167 soldiers at Fort Brown, including First Sergeant Sanders, without court-martial or other trial.

Mingo Sanders had been in the Army for almost twenty-six years and was only seventeen months from retirement.  He lost most retirement benefits, including his pension, but retained the right to be buried in a national cemetery.  Around 1909 he was briefly employed as a messenger in the Interior Department by order of now President William Howard Taft. Ironically, it was Taft who, as Roosevelt’s Secretary of War in 1906, executed the discharge order.  When Taft left the Presidency in 1913, Sanders lost his job.

Mingo Sanders died at Freedmen’s Hospital on the campus of Howard University in Washington, D.C. on August 15, 1929 and was buried in Arlington National Cemetery in Virginia.
Forty-three years later, in 1972 with President Richard Nixon in the White House, Sanders and one hundred sixty-six Brownsville soldiers were posthumously awarded honorable discharges.  Only Dorsie Willis, the youngest of the discharged soldiers and the last one processed out of the army, was still alive.  He received his honorable discharge and $25,000 from the United States government. As the oldest and most senior ranked of the discharged soldiers, First Sergeant Mingo Sanders will forever be the face of the terribly treated black soldiers of the 25th Infantry.