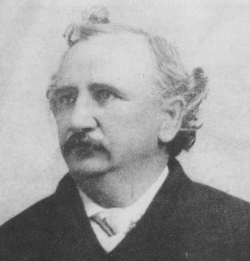 Politician and educator, Thomas E. Miller was born in Ferrebeeville, Beaufort County, South Carolina on June 17, 1849.  Miller was the son of free black parents, and moved with them to Charleston, South Carolina in 1851 where he attended the all-black schools in the city.  After the Civil War, Miller moved to Hudson, New York where he worked and continued his education.  He then received a scholarship that allowed him to attend Lincoln University in Chester County, Pennsylvania.  Miller graduated from Lincoln in 1872.

Miller returned to South Carolina and was appointed school commissioner of Beaufort County.  He then moved to Columbia, the state capital where he studied law at the recently integrated University of South Carolina.  Miller was admitted to the South Carolina bar in 1875.

While preparing for a career in the law Miller had already entered politics.  He served as a member of the South Carolina Assembly between 1874 and 1880.  Then in 1880 he was elected to the State Senate and nominated for lieutenant governor.  Miller did not enter the race because the South Carolina Republican Party chose not to put forward a ticket in the wake of anti-black violence.  Miller nonetheless remained politically active.  He was the Republican Party state chairman in 1884.

In November 1888, Thomas Miller was elected to the U.S. Congress from South Carolina’s heavily African American Second Congressional District.  Along with earlier U.S. Congressmen such as Robert Smalls, Richard H. Cain and Alonzo J. Ransier, Miller became the seventh African American elected to the House of Representatives from South Carolina during and after Reconstruction. He was also one of the last to serve, being elected to a single two year term in 1889.  South Carolina followed Mississippi in black voter disenfranchisement by enforcing the ability to read and write the Constitution or to own property worth at least $300.00, a move that directly reduced Miller’s African American support.

In direct response to the charge by Senator Alfred H. Colquitt of Georgia that blacks had done nothing to demonstrate their capacity for government, Miller delivered a major address before Congress.  Recalling his experience in the South Carolina State Legislature he argued that black lawmakers were largely responsible for “laws relative to finance, the building of penal and charitable institutions and the greatest of all, the establishment of the public school system.”  He stressed that it was systematic racism that hindered his state and the South’s overall economic prosperity.

After his defeat Miller returned to private practice in 1891 although he served again in the South Carolina Assembly between 1894 and 1896 where he continued his fight against unfair literacy amendments to South Carolina’s voting laws.  In March 1896, Miller was appointed the first President of the newly founded State Negro College (later renamed South Carolina State College) in Orangeburg.  Miller used the position to promote the employment of African American teachers in the state’s black public schools.  He held the post for fifteen years until he was forced to resign in 1911 by Governor Coleman L. Blease whom he had opposed in the previous year’s election.  Miller retired from both politics and education and lived in Charleston until 1923. After briefly residing in Philadelphia, Miller returned to Charleston and died there on April 8, 1938.