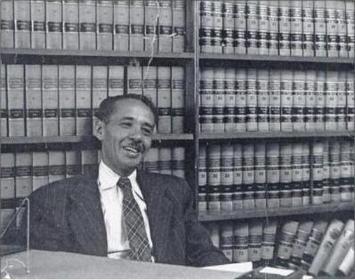 Born on January 20, 1903 in Pender, Nebraska to John Miller, a former slave, and Nora Herbaugh, a white Midwesterner, Miller was, at his death in 1967, considered one of the leading civil rights attorneys in the United States, particularly in the field of housing discrimination. Miller’s dedication to the pursuit of social justice was part of his family’s legacy. He attended the University of Kansas and Howard University, graduating in 1928 from Washburn University, Topeka, Kansas, with a bachelor of laws degree.

In 1929, Miller set out for Los Angeles from Kansas, a young, freshly minted attorney who preferred political activism over the law. In 1930, he worked as editor of the California Eagle, the oldest African American newspaper in Los Angeles which, in 1951, he purchased. By 1935, he lived for a time in New York working as an editor of the New Masses and assistant editor of the Crusader News Agency, alongside Cyril Briggs and Benjamin Davis, Jr., well known African American communists. Earlier, in 1932, Miller and the prominent writer Langston Hughes made a historic adventure to the Soviet Union along with 20 other African Americans to make a film on black life in the U.S.  Although Miller saw himself as a fiery radical writer, he was eventually persuaded that he should take on cases that ignited his sense of social justice.

Miller, alongside Thurgood Marshall, argued two landmark rulings before the U.S. Supreme Court that effectively abolished restrictive racial housing covenants. As a member of the national legal team of the National Association for the Advancement of Colored People (NAACP), Miller helped change American law and history forever by writing the majority of appellate briefs in Brown v. Board of Education of Topeka, Kansas. An advocate of complete equality, Miller was one of the two lawyers to join American Civil Liberties Union (ACLU) counsel to challenge the constitutionality of the evacuation and internment of West Coast Japanese citizens and foreign nationals during World War II. With his trademark keen wit and incisive rhetorical courtroom style he won hundreds of restrictive housing cases, including that of African American movie actresses Hattie McDaniel and Ethel Waters, co-plaintiffs against hostile white Los Angeles property owners in 1945.

In addition to ousting Los Angeles’ racist fire chief or directing his attention to the passage of the Rumford Fair Housing Act and the enforcement of Fair Employment Practices in California, he represented, at the request of Malcolm X, 14 black Muslims in the aftermath of a 1962 street battle where six unarmed Muslims had been shot down “in cold blood” by officers of the Los Angeles Police Department.

In 1964, Miller was appointed to the Los Angeles County Municipal Court. In his honor, the State Bar of California annually awards the Loren Miller Legal Services Award to attorneys providing legal services to the poor. Loren Miller died in Los Angeles on July 14, 1967.