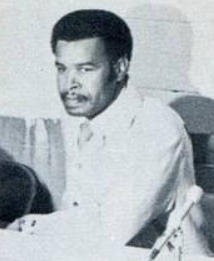 De Arthur Woodrow Miller or “Woody,” as he was most popularly known, was a trailblazer in the African American community of Fresno, California. He was the first African American to own a radio station in California’s Central Valley and was a leader of the local the civil rights movement.

De Arthur Woodrow Miller was born in Dermott, Arkansas on October 22, 1927, grew up partly in Oakland, California, and then moved to Fresno in 1935 where he lived on a cattle ranch owned by his grandparents. After graduation from high school in 1945, Miller served as an aircraft mechanic in a segregated U.S. Army until it desegregated in 1948.

Miller became a co-owner and general manager of KLIP in 1977. He promoted a station format that was primarily rhythm and blues, jazz, gospel, and urban contemporary music targeting an audience beyond Fresno and throughout California’s Central Valley. In the early 1980s, he co-founded and operated Valley Black Talk Radio at KFCF, one of the earliest examples of the talk radio format that would become nationally popular in the late 1980s.  His program included interviews with community leaders and musicians as well as live broadcasts of community meetings and church services.

Miller was a pioneer in developing a half-black, half-Hispanic format. The format focused on targeting the African American market in the mornings with Rhythm and Blues. In the afternoon and evenings, he geared the music to the Mexican American market which was a larger segment of the local audience than black Fresno. He also interviewed some of the great musicians of the time on his program, “The Jazz World of Woody Miller” which aired on KLIP. James Brown, Louis Armstrong, Duke Ellington, and Ray Charles were among the people who appeared on his show.  Miller also taught a course on the History of African American Music at Fresno City College and volunteered as a Jazz Host on radio station KFSR, FM on the campus of California State University, Fresno.

Miller ran unsuccessfully for a Fresno City council seat in 1971. In 1968 he co-chaired the Central Valley presidential campaign of Robert Kennedy and coordinated Jesse Jackson’s local campaign committee when the civil rights leader ran for president in 1984 and 1988. In 1983, the City of Fresno named May 14 “Woody Miller Day.”

“This soulful radio broadcaster was one of the Valley’s first black public figures,” Fresno Bee, http://www.fresnobee.com/news/local/article157473209.html.