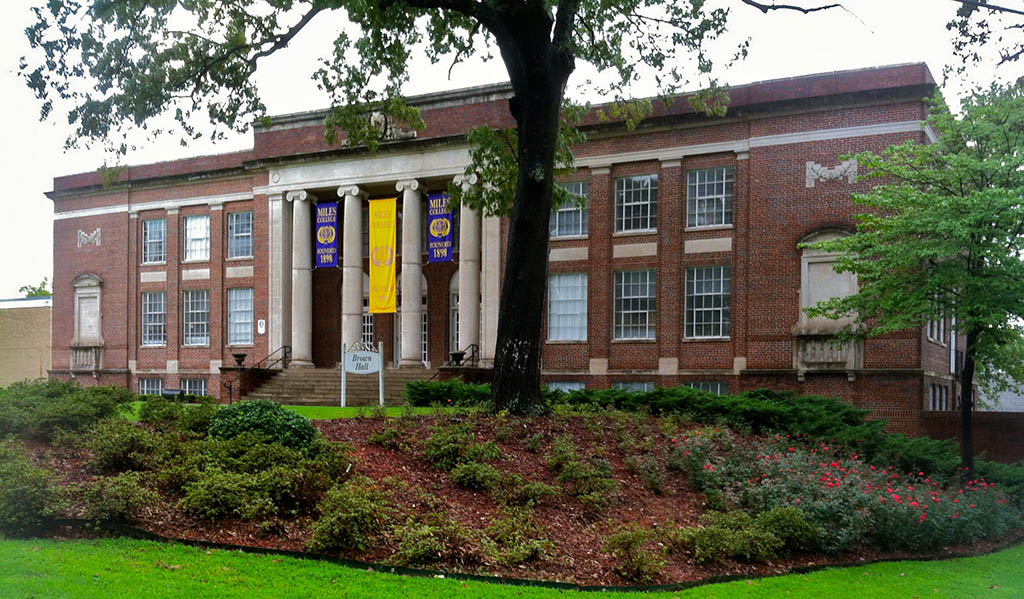 Miles College is a private, four-year Historically Black College and University (HBCU) located in Fairfield, Alabama, about six miles west of downtown Birmingham. The school was founded in 1905 by the Colored Methodist Episcopal Church (now called Christian Methodist Episcopal Church or CME Church), but its beginnings goes back to 1898, when the Alabama and North Alabama CME Church conferences petitioned for a higher education institution for blacks in the state. The conferences’ petitions were granted in 1905 when Booker City High School was turned into a college.

In 1907, the college moved from Booker City, Alabama to its present campus in Fairfield under the leadership of its first president, James A. Bray. The next year (1908), the school was named Miles Memorial College, in memory of ex-slave and minister, Bishop William H. Miles. In 1941, the Board of Trustees shortened the college’s name to Miles College.

In 1911, Miles awarded its first baccalaureate degrees. Shortly afterwards it became co-educational. The first woman to graduate, Willie Selden McDaniel, completed her requirements in May 1918.

William A. Bell was President of Miles through much of the early 20th Century. He first held the post from 1912 to 1913. He became President again in 1936, serving until his death in 1961. Bell’s most significant accomplishment was getting and keeping Miles out of debt during the Great Depression when many feared the college would close. He also led the effort to increase enrollment and raise academic standards.

Some Miles students, faculty and staff were involved in the civil rights movement and especially the Birmingham campaign of 1963.  One year earlier Miles students initiated a boycott of nearby business that practiced racial segregation or exclusion. In 1974 the College established the Miles Law School and by 1976, it had a record 1,500 students.

Miles’ financial troubles returned in the 1980s when the federal government began to reduce its commitment to student aid. At the time more than 80% of the college’s students received financial aid. Many dropped out after the cuts and by 1986, the enrollment fell to 500 students. Miles also lost its accreditation with the budget cuts and enrollment decline.

In 1989 when Albert J.H. Sloan became the college’s new president, the enrollment was 438 and the endowment was $650,000.  Within a few years President Sloan was able to restore accreditation and pull the college out of debt. He also launched an ambitious fundraising effort that increased the endowment to $12 million in 2002. Under his leadership Miles began attracting students again.  By 2009 it had a record 1,700 students and is currently ranked as the fastest-growing private black college in the nation. Today Miles College is ranked forth, behind Stanford University, Duke University, and Spelman College, in African-American graduation rates by The Education Trust, a non-profit organization.

In 1995, President Sloan hired a CME minister George T. French as Director of Development. When Sloan passed away on November 2005, French was hired as the college’s “interim president” and officially inaugurated to presidency on October 13, 2006.