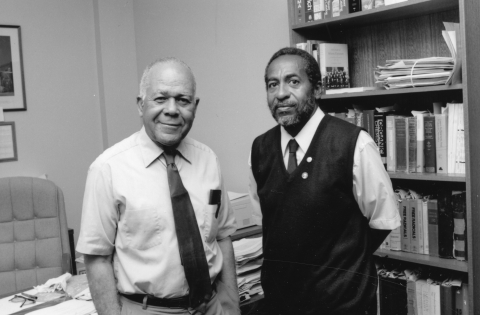 Ronald Elbert Mickens is the Fuller E. Calloway Professor of Physics at Clark-Atlanta University in Atlanta, Georgia. Born in Petersburg, Virginia, on February 7, 1943, he was the son of Joseph Mickens and Daisy Brown Mickens but was raised by his maternal grandparents. His grandfather, James Williamson, inspired Mickens to become a scientist at age eight. At Peabody High School in Petersburg he did well in mathematics and physics and entered Fisk University in Nashville, Tennessee, on full scholarship at age seventeen.

Mickens left MIT in 1970 to teach physics at Fisk. Over the next twelve years he also conducted research at Vanderbilt and the Joint Institute for Laboratory Astrophysics in Boulder, Colorado. Also during this period he received grants from the National Aeronautics and Space Administration (NASA) and a Ford Foundation Fellowship. He began teaching at Clark-Atlanta in 1982 and, when awarded the 1984-1985 United Negro College Fund Distinguished Faculty Fellowship, was concurrently made Callaway Professor of Physics.

As editor he compiled Nonstandard Finite Difference Models of Differential Equations (1993). As a historian of African Americans in science he authored Edward Bouchet: The First African American Doctorate (2002), edited Science and Technology (1989), and self-published and edited the tribute to African American physicists titled The African American Presence in Physics (1999).

Mickens’ scientific research interests have included chaos theory, mathematical epidemiology, complex functions, high-order perturbation techniques, theoretical elementary particle physics, and modeling of non-linear oscillations. Elected a Fellow of the American Physical Society in 1999, his efforts to publicize the good work of black scientists have not gone unnoticed as he was appointed to serve as Historian for the National Society of Black Physicists. Mickens and his wife Maria have two children: daughter Lea Mickens, and son Dr. James W. Mickens, a computer science professor at Harvard University.