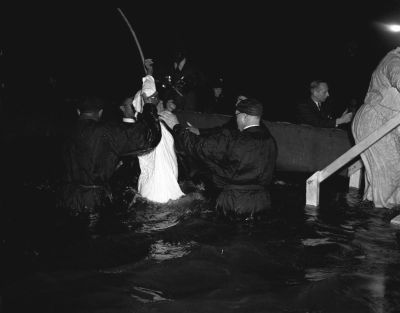 Solomon Michaux was a radio evangelist, entrepreneur, and founder of the Church of God Movement; he was also known as the “Happy Am I Preacher.” Michaux was born around 1885 in Buckroe Beach, Virginia into a devout family of Baptists. He grew up in Newport News, Virginia where he spent his childhood in local public schools and helping his family’s seafood business by peddling fish to local military men in nearby Camp Lee. Michaux married Eliza Pauline in 1906. They had no children.

In 1917, Michaux established the first black Church of God in Hopewell, Virginia, but it did not flourish.  Three years later he organized a Church of God movement in Newport News, where he used a local radio station to broadcast his sermons. In 1922, Michaux was arrested for holding racially integrated baptisms. He appeared in court, successfully defended himself using biblical rhetoric and was acquitted.

Eventually “Elder” Michaux as he was now called, moved his headquarters to Washington D.C. where he received national acclaim from his radio (and later television) broadcasts, flamboyant religious experiences, and service to the poor. His movement was based on two principles, the sacred word of the Supreme God which makes no reference to class or race, the only salvation for the immoral and wicked practices of western religion was the Church of God. Michaux used local WJSV radio in Alexandria, Virginia to preach on weekdays and CBS radio on Saturdays, allowing his message to reach listeners across the country. His sermons included condemnation of liquor, prostitutes, slot machines, dancing, jazz music, and the theory of evolution. Michaux also published a monthly newspaper called Happy News that had a circulation of over 8,000.

Besides his widespread media following, Michaux also developed an activist ministry that assisted the poor and homeless. The Church of God provided shelter and food for persons evicted from their homes, as well as storage for their belongings until they found new accommodations.  The Church also started an employment agency for both church and community members. Viewed as one of its most important projects, Michaux’s Church built one of the largest privately owned housing developments for African Americans in the United States, a 594-unit apartment housing complex in Washington D.C. called Mayfair Mansions.

Michaux died on October 20, 1969 in Washington, two months after suffering a stroke. Over 3,000 people attended his funeral in Newport News, Virginia.