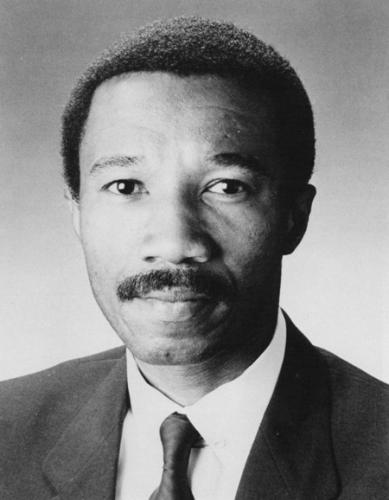 Kweisi Mfume was born as Frizzel Gray in Baltimore, Maryland on October 24, 1948, the eldest of four children.  Gray experienced a troubled childhood with the abandonment of his father and death of his mother as well as economic instability, but made a successful return to his academic studies in 1971.

In 1979 Mfume was elected to the Baltimore City Council in 1979.  While on the city council, Mfume helped enact legislation which divested Baltimore of investments in companies doing business in South Africa.

In 1985 when Maryland’s Seventh Congressional District Representative Parren J. Mitchell announced his retirement from Congress, Kweisi Mfume ran for the seat the following year and was successful in both the primary and general election.

Congressman Mfume served on the Banking, Finance and Urban Affairs Committee and three of its subcommittees (Housing and Community Development, Economic Stabilization, and International Development); the Small Business Committee and two of its subcommittees (Minority Enterprise, and Exports, Tourism and Special Problems); and the Select Committee on Hunger. From 1987 to 1989 he was the treasurer of the Congressional Black Caucus and later served as its vice chairman.

Kweisi Mfume retired on February 15, 1996 and focused on his new position as chief executive office of the National Association for the Advancement of Colored People (NAACP).  He held that position until 2004. Mfume is a member of Sigma Pi Phi Fraternity.