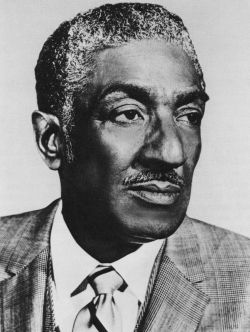 Ralph Metcalfe, was an outstanding U.S. sprinter, track coach, and politican born in Atlanta, Georgia and raised in Chicago, Illinois. During Metcalfe’s years as a student at Marquette University in Milwaukee, Wisconsin from 1932 through 1934, he was arguably the world’s fastest human. His strong finishes earned him four Olympic medals (gold, 2 silver, and bronze), eight Amateur Athletic Union (AAU) titles, and six National Collegiate Athletic Association (NCAA) titles from 1932 through 1936. Perhaps Metcalfe’s most interesting moments in track were not his wins but his virtual dead heat second place finishes in the 100 meter dash at the 1932 and 1936 Summer Olympics at Los Angeles, California and Berlin, Germany to rivals Eddie Tolan and Jesse Owens, respectively.

Throughout Metcalfe’s amateur track career he held the 100 meter dash record at 10.30 in 1934, tying it at least eight times, and he also tied the 200 meter dash world record of 20.6 seconds. Metcalfe’s lone Olympic gold medal was won in Berlin in 1936 when he ran as part of the famed 4 x 100 relay team which featured Jesse Owens. After this event Metcalfe retired from track, graduated from Marquette, and attended the University of Southern California (USC), earning a Masters in 1939. Metcalf was a member of Alpha Phi Alpha Fraternity.

During World War II he joined the armed forces and fought to end Jim Crow segregation in America and end fascism abroad, better known as the Double-V movement. After the war, Metcalfe briefly coached track at Xavier University in Louisiana, then returned to Chicago, becoming a successful businessman and alderman for the South Side. In 1970, Metcalfe’s political ambitions expanded when he was elected a U.S. Congressman representing Illinois’ First Congressional District district (1971–78). During his term in Congress, Metcalfe co-founded the Congressional Black Caucus (CBC), was inducted into the United States Track and Field Hall of Fame (1975), and was named a member of the President’s Commission on Olympic Sports.