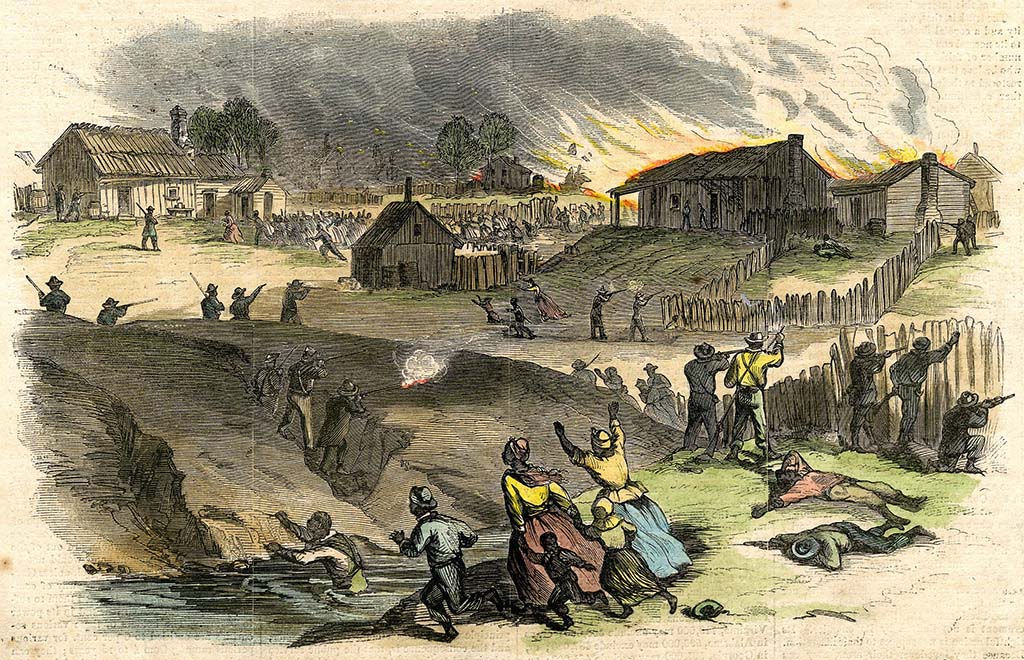 In the late afternoon of May 1, 1866, long broiling tensions between the residents of southern Memphis, Tennessee erupted into a three day riot known as the Memphis Riot of 1866.  The riot began when a white police officer attempted to arrest a black ex-soldier and an estimated fifty blacks showed up to stop the police from jailing him.  Accounts vary as to who began the shooting, but the altercation that ensued quickly involved more and more of the city.  The victims initially were only black soldiers, but the violence quickly spread to other blacks living just south of Memphis who were attacked while their homes, schools, and churches were destroyed.  White Northerners who worked as missionaries and school teachers in black schools were also targeted.

In an attempt to restore order, U.S. Army commander George Stoneman ordered the black soldiers of the Third United States Colored Heavy Artillery regiment back to Fort Pickering just outside the city and they obeyed.  Nonetheless, the violence continued throughout the night as the targets now became the black civilians in the city.  Memphis police and firemen openly participated in the violence and looting and as a result the city’s black citizens could not count on them to stop the attacks or put out the fires in the African American neighborhoods.  The conflict stretched into a second day when Memphis Mayor John Park refused to request state or federal assistance.  On the afternoon of the third day, General Stoneman declared martial law and sent black and white troops into the city to reestablish order.

Within a month a congressional committee arrived to investigate the riot.  The investigation and interviews were thorough, but the report was controlled by Radical Republicans in Congress and used to gain support for Reconstruction policies.   The national impact of the report was the rapid endorsement of the Fourteenth Amendment to the Constitution, making all ex-slaves citizens, and the increasing of Republican majorities in Congress in the November 1866 elections.

The report sought to show the vulnerability of southern blacks immediately after the end of the Civil War but it targeted Irish southerners as their major threat (as opposed to white southerners in general).  The report blamed the overwhelmingly Irish police force of Memphis as well as the black-Irish competition for manual labor jobs for the underlying tensions that led to the conflict.  Yet it virtually ignored the non-Irish whites who participated in the rioting and the role of black soldiers who before the fighting had been given responsibility for patrolling much of the city. The authority given to the black soldiers disturbed and discomforted many of Memphis’s white citizens who preferred that the newly freed slaves retain subordinate roles in their city.

By the end of May 3, Memphis’s black community had been devastated.  Forty-six blacks had been killed.  Two whites died in the conflict, one as the result of an accident and another, a policeman, because of a self-inflicted gunshot.  There were five rapes and 285 people were injured.  Over one hundred houses and buildings burned down as a result of the riot and the neglect of the firemen.  No arrests were made.