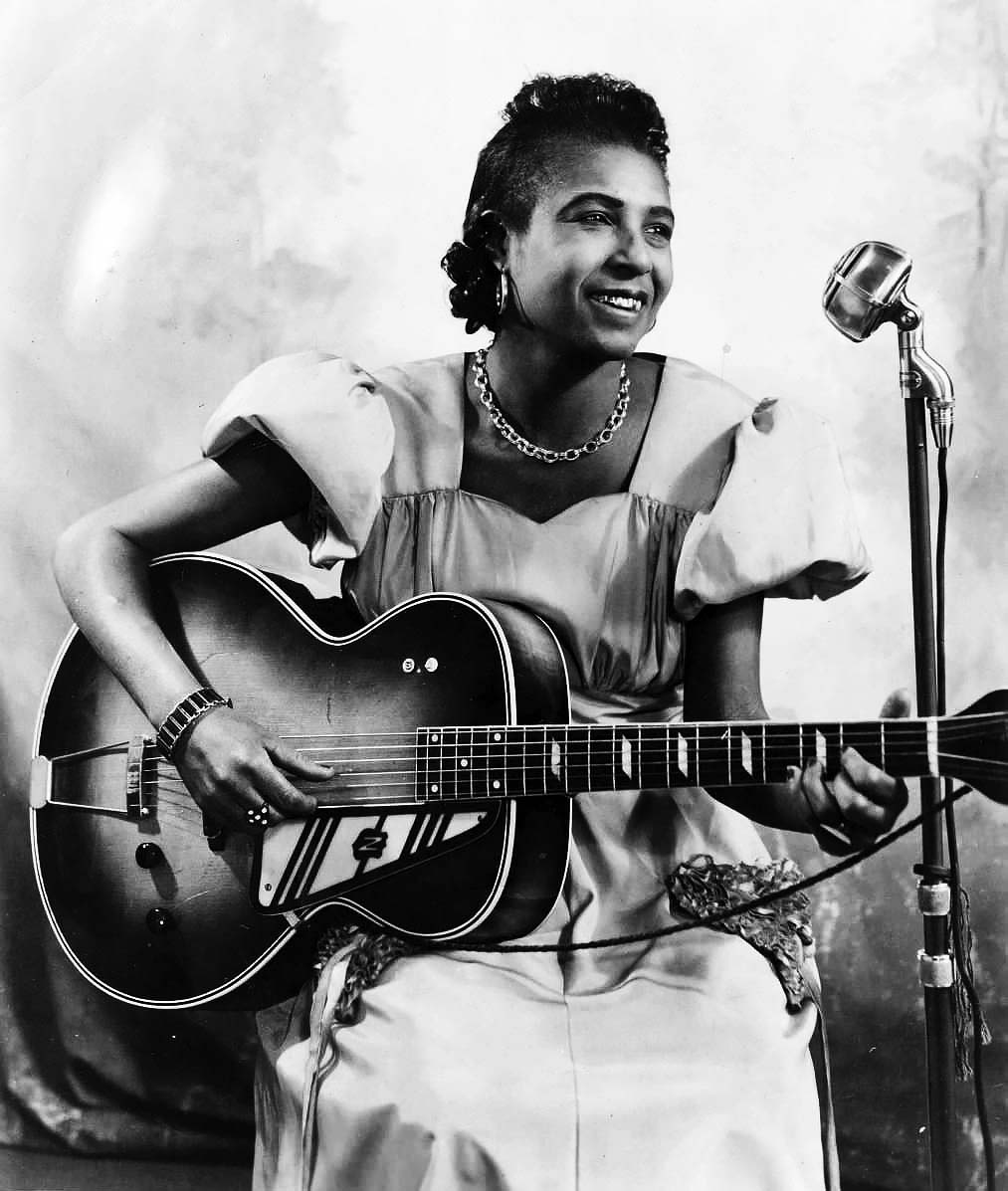 Memphis Minnie, known as the “Queen of the Blues,” was a singer, guitarist, and songwriter. Her title stems from her legacy of successfully recording music across four decades as well as being the lone female voice in a male dominated blues scene.

Memphis Minnie was born Lizzie Douglas in rural Algiers, Louisiana on June 3, 1887. She was the oldest of 13 brothers and sisters. When she was ten years old, her family moved to Walls, Mississippi, about twenty miles south of Memphis, Tennessee. Minnie started playing banjo at age seven and got her first guitar a couple years later. This led to her playing on the Memphis streets and in the towns surrounding Walls. After, she joined the Ringling Brothers circus.

With a powerful voice and unique guitar skills, Minnie’s career lasted from the 1920s of country blues to the electric blues in 1950s. She largely contributed to the blues’ urban transformation when she moved to Chicago in 1930. Her style was rooted in country, but she helped form the electric Chicago blues, as well as incorporate what would later be R&B and rock ’n’ roll into her music.

Throughout her career, Minnie worked with notable blues performers including Joe McCoy, who became her husband in the late 1920s. Together, they were signed by the Columbia label and recorded one of her best known numbers, “Bumble Bee,” in 1930. Minnie and McCoy moved to Chicago, where they became part of the city’s growing blues scene. Their records did not sell well due to the Great Depression, but they still produced influential blues music. By 1935, they had split up.

Minnie started her “band period” with other men and married one of them, Ernest “Little Joe Son” Lawlers some time in the late 30s. His guitar work was heard alongside hers for many years on popular tracks such as “HooDoo Lady.” In their “Me and My Chauffeur Blues,” recorded in 1941, Minnie showed her conversion to the electric guitar.

Minnie’s records covered a wide range of subject matter. Many of her songs were openly sexual and delivered in her signature confident, sassy voice. Other topics included crime, voodoo, trains, and health. Throughout all her tracks, she was instrumentally and lyrically in tune with the lives of Black Americans.

Throughout her 25-year career on the Vocalion, Decca, Blueblird, Okey and Checker labels, Memphis Minnie recorded over 200 tracks. In her later years, she recorded with Sunnyland Slim and Little Walter until 1954. In 1955, failing health led her to retire to Memphis with Little Son Joe, who passed away in 1961. Minnie passed away in Memphis on August 6, 1973, at the age of 86.

Minnie’s influence was particularly strong among female musicians, as she uniquely shaped her life in a time of limited possibilities offered to African American women. Today, Memphis Minnie remains an influential musician because of her inventive, rhythmic guitar playing and her songs that captured people across generations.