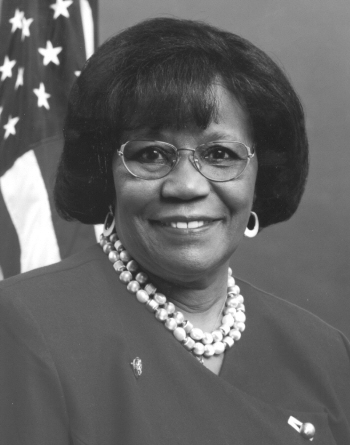 Carrie Meek was born on April 29, 1926, in Tallahassee, Florida. Her parents were sharecroppers and her childhood neighborhood was racially segregated. Meek attended and graduated from Florida A&M University. Graduate schools in Florida were still segregated at this time so she was forced to move to Michigan to pursue her Masters in Science at University of Michigan where she graduated from in 1948.

Meek worked as an educator at Bethune Cookman College, Florida A&M University, and Miami-Dade Community College until 1979 when she was elected to serve in the Florida State House of Representatives. In 1982 Meek became the first African American woman to be elected to the Florida State Senate. During her time in the State Senate, Meek focused on issues of Education and affordable housing, including supporting a bill that led to the construction of thousands of affordable housing units.

From January 3, 1993 to January 3, 2003 Carrie Meek served as a Representative of Florida’s 17th Congressional District to the U.S. House of Representatives. This election made her the first African American to be elected to represent Florida since Reconstruction, but she gained her seat at a difficult time for her district. The 17th District included Dade County which had been badly damaged by Hurricane Andrew and needed rebuilding and infrastructure design. Meek was able to direct $100 million in federal assistance towards the rebuilding projects of Dade County while keeping focused on the issues she saw as most important: health care, housing, and education.

During her time in office, Meek maintained a liberal voting record and was particularly vocal about the need for election reform, a concern that was exacerbated when the North Miami residents of her district complained about voting irregularities during the 2000 U.S. Presidential election. Meek was also a strong supporter of women’s rights, civil rights, and health care reform, all of which are reflected in her voting record.

In 2003 Carrie Meek ended her last term in Congress and was followed in the 17th Congressional District seat by her son, Kendrick Meek. Carrie Meek passed away on November 28th, 2021 at her home in Miami, Florida. Meek was 95 and is survived by her three children, seven grandchildren, and five great grandchildren.