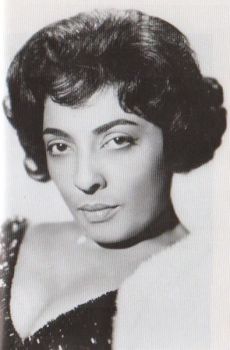 Carmen McRae, a jazz singer and songwriter, was born on April 8, 1920 in Harlem, New York. Her father Osmond Llewelyn McRae was born in Santa Cruz, Jamaica in 1891; he moved from Jamaica to Costa Rica to Cuba and then to New York City, where Carmen was born to Osmond and his second wife Evadne (originally Evadne Gayle). Oscar McRae owned a health club at the McAlpin Hotel in Harlem. McRae learned to play piano at a young age and she won an amateur singing contest at the Apollo Theatre around 1939. As a teenager she befriended musician and songwriter Irene Kitching, who helped McRae become involved in the Harlem jazz scene. McRae graduated from Julia Richman High School in 1938. She achieved her first notoriety the following year when she wrote the song “Dream of Life” and Billie Holiday recorded it for the Vocalion/ Okeh label.

In the early 1940s, McRae moved to Alabama and married jazz drummer Kenny Clarke, whom she would later divorce.  In 1941, McRae moved to Washington, D.C. where she worked for the government but returned to New York City in 1943.  There she resumed her career, singing with Benny Carter, Earl Hines, Count Basie, and Mercer Ellington’s bands.  Around this time she also worked in the chorus at Club Harlem in Atlantic City. Her singing reflected the influences of Billie Holiday and Sarah Vaughan. After spending several years singing in Chicago, Illinois, Minton’s Playhouse in New York hired her as a pianist and then as a member of Tony Scott’s band.

During the early 1950s, McRae recorded songs on the Stardust, Venus, and Bethlehem labels but in 1955 she signed with the Decca recording label, which led to her national success.  While working for Decca, she would record “Skyliner,” “By Special Request,” “After Glow,” “Something to Swing About,” “Suppertime,” “Torchy,” and “Blue Moon.”  In 1956, she married her second husband, bassist Ike Isaacs, but that marriage also soon ended in divorce.   In the late 1960s, McRae moved to California to be near family.

For the next thirty years, McRae sang throughout the world and continued to record albums, including tributes to Billie Holiday, Thelonious Monk, and Sarah Vaughan.  Throughout her career, she won various awards and recognitions, including Down Beat’s Best New Female Singer (1954), six Grammy award nominations, an award from the NAACP, and the National Endowment for the Arts’ National Jazz Masters Fellowship Award.

A heavy smoker, McRae suffered from respiratory failure in May 1991.  In October 1994, she had a stroke, which led to a coma.  Carmen McRae died on November 10, 1994 in Beverly Hills, California.