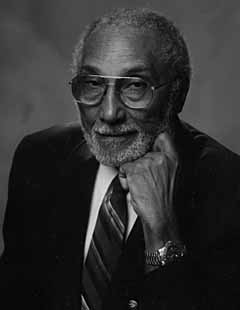 James B. McMillan
Fair use image

James B. McMillan was the first black dentist in Nevada. In the 1960s, he successfully fought against segregation in Las Vegas. McMillan was born on January 14, 1917, in Aberdeen, Mississippi, the son of James Milton McMillan and Rosalie Gay.

McMillan’s father died when he was one year old, and he was raised by his mother. Locally, she was known for being vocally defiant of racial discrimination. At a young age, in the midst of rising racial tensions in the South, James saw his mother whipped by members of the Ku Klux Klan. For this reason, they decided to leave Mississippi. After moving to different cities in the northern United States, they eventually settled in Detroit, Michigan.

Though far from the South, McMillan still experienced severe racism and segregation in Michigan. At the University of Detroit, he was the only African American on the football team. Inspired by Dr. Haley Bell, a successful black dentist in Detroit, McMillan decided to go to Meharry School of Dentistry.

On the eve of the World War II, McMillan joined the U.S. Army despite the segregation and discrimination black men and women faced in the military at that time. He became part of the dental corps and rose to the rank of captain.

Back in the U.S. from his deployment in India, he was encouraged by Dr. Charles West, a black doctor in Nevada, to move to Las Vegas. Having experienced a recent divorce, suffering poor living conditions in Detroit, and impacted by the illness of one of his children, he saw Las Vegas as a chance at a better life where he could succeed financially.

After arriving in Las Vegas in the 1950s, McMillan became involved with the local branch of the NAACP, and soon was elected president.  He led the campaigns which focused on segregation in jobs, housing, and public accommodation in the city. In 1960, the local branch of the NAACP threatened boycotts in Las Vegas if nothing was done about segregation. Their push for change was a success; most hotels, casinos, and restaurants started accepting black people in their facilities, effectively ending segregation on the Las Vegas Strip. The agreement with casino owners and their backers and the civil rights activists, led by McMillan, was worked out at the Moulin Rouge, the most prominent black-owned casino in the city and was thereafter called the Moulin Rouge Agreement.

In order to encourage black voting, McMillan also formed with Dr. West the Nevada League of Voters in 1957.  McMillan was the organization’s first President. In 1992, he was elected to the Clark County School Board in which he served for four years. He also founded the Las Vegas Human Rights Commission and was the first black Nevada resident to be a member of the State Democratic Central Committee. Dr. McMillan died of cancer on March 20, 1999, in Las Vegas at the age of 82.

Years later, a school in Las Vegas was named after McMillan in honor of his activism in the community. As a whole, the actions of Dr. James McMillan and his peers changed the racial landscape of Las Vegas.