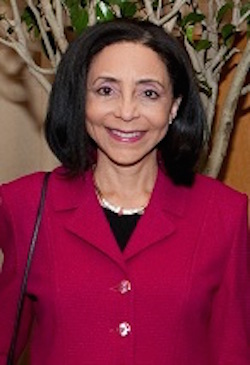 Ambassador Elizabeth Davenport McKune was born on November 15, 1947 in Detroit, Michigan. She became a Foreign Service officer in 1973 and specialized in the Middle East. McKune is the daughter of West Point graduate Colonel Clarence M. Davenport, Jr. and distinguished National Institute of Mental Health psychiatric social worker Yolande Davenport (née Bradfield). Ambassador McKune earned her Bachelor of Arts degree from Carleton College (Minnesota) in 1970 and received her Master of Arts degree in Advanced International Studies from Johns Hopkins University (Maryland) in 1972. She also received a Distinguished Graduate Certificate in 1992 from the National War College in Washington, D.C.

Ambassador McKune has served in numerous positions in the Foreign Service throughout her career including Deputy Executive Secretary to the Secretary of State and as Office Director for Pacific Island Affairs for the Bureau of East Asian and Pacific Affairs. McKune was also assigned as a political analyst to the State Department’s Bureau of Intelligence and Research, where she addressed issues related to Caribbean affairs.

McKune has also worked in several capacities in U.S. Embassies in the Middle East, North Africa, and Europe.  Her foreign assignments included Deputy Chief of Mission at the U.S. Embassy in the Sultanate of Oman, Economic and Political Officer in Egypt, Consular and Commercial Officer in Israel, Acting Public Affairs Officer and Economic Counselor in Lebanon, and as a Cultural and Language Consultant in Tunisia. She also served at embassies in Iraq and Great Britain. Other senior positions held by Ambassador McKune in Washington, D.C. have included Director of the Pan-Arab Media Outreach Center, Advisor to the Commandant of the Industrial College of the Armed Forces, and Country Director for Northern Arabian affairs in the Bureau of Near Eastern Affairs for the U.S. State Department.

Her passion for international relations continued after she left the Foreign Service. In 2007, Ambassador McKune assumed the position of Executive Director of the Sultan Qaboos Cultural Center (SQCC) in Washington, D.C. SQCC was created to promote mutual respect and understanding between the United States and the Sultanate of Oman and strives to educate a new generation of culturally sensitive and knowledgeable citizens in each society.

Ambassador McKune is fluent in Arabic, French, and Italian and resides in Northern Virginia with her husband Kenneth.