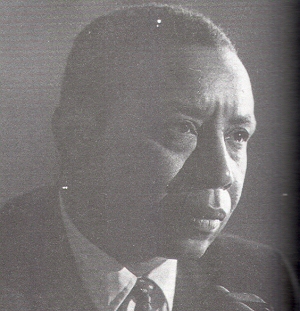 Floyd B. McKissick
Fair use image

Floyd Bixler McKissick replaced James Farmer as National Director of the Congress Of Racial Equality (CORE) on January 3, 1966, making him the second ever National Director of CORE. Under McKissick’s leadership, CORE underwent a radical transformation from an interracial, non-violent civil rights organization into a group that promoted the concept of Black Power.

McKissick was born on March 9, 1922 in Asheville, North Carolina.  He entered Morehouse College in Atlanta in 1940 before joining the U.S. army where he served in Europe during World War II.  McKissick attained the rank of sergeant while in the service.  He then returned to Morehouse and graduated in 1948. While a student at Morehouse, McKissick became actively involved in the ranks of CORE and the National Association for the Advancement of Colored People (NAACP). In 1947 he took part in the first freedom riders campaign. This campaign was met with intense racial hostility. McKissick called the campaign his “baptism in non-violence.”

McKissick applied to the all-white University of North Carolina (UNC) Law School but was barred from the University because of his race.  He entered North Carolina Central College Law School instead and graduated in 1951.  While in the black law school the NAACP accepted his case and filed a lawsuit challenging his denial at UNC.  With Thurgood Marshall arguing the case before a federal judge, McKissick was finally granted admission in 1951.  Although he had a law degree, McKissick and three other black students enrolled in UNC law courses that summer.

McKissick established a law practice in Durham, North Carolina while continuing to actively engage in civil rights campaigns, protests, and boycotts. In the 1950s he challenged the policies of the Tobacco Workers International Union, successfully wining their right to be admitted to skilled trades on the basis of their seniority.  He also represented his own children in a desegregation lawsuit in Durham.  In 1960 he represented the first students involved in sit-ins segregated lunch counters in Durham.

By the mid-1960s, however, McKissick became increasingly skeptical of the stated goal of racial integration and the non-violent tactics of the movement.  He led a group of insurgent CORE members who shared his views in a campaign that eventually changed the direction of the organization.  McKissick argued that Black Power as an organizing principle could enrich and revolutionize African-American communities. To this end, he pushed for increased African-American control over communities, governments, economics, and schools and used CORE to assist local community leaders in these efforts.

McKissick remained President of CORE until 1968. Soon after leaving the organization he launched an ambitions campaign to create a new racially integrated community known as Soul City. Located in the predominately black area of eastern North Carolina, Soul City was a planned community with an infrastructure capacity sufficient to support an eventual population of 55,000. In July 1972, McKissick received $19 million in federal aid in order to achieve this goal. Within months, he became the minority campaign chairman for President Richard Nixon’s reelection campaign.  Although Soul City was declared economically unviable in 1979, McKissick and a few other people continued to live there.

In June 1990, Floyd McKissick, a member of Alpha Phi Alpha Fraternity, was appointed a state district court judge by North Carolina, by Governor James G. Martin. Less than a year later, while working as pastor of the First Baptist Church of Soul City, McKissick died of lung cancer at the age 69 on April 28, 1991.  He was buried in Soul City.