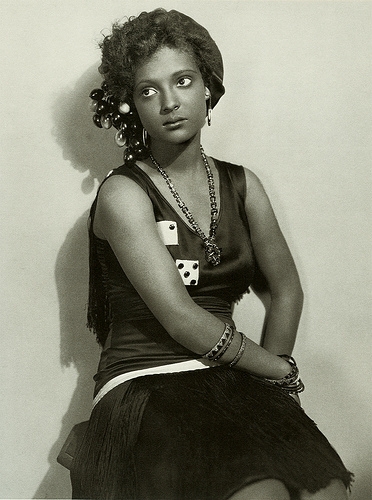 Nina Mae McKinney, one of the first African American leading actresses in Hollywood, was born Nannie Mayme McKinney in 1913. The Lancaster, South Carolina native was reared by her great-aunt, Carrie Sanders on the Estate of Colonel LeRoy Sanders, where her family had worked for many generations. She attended Lancaster Industrial School until the age of 13 before relocating to New York to live with her mother, Georgia Crawford McKinney. As an early teen, McKinney performed in Harlem’s nightclubs and eventually on Broadway in the Lew Leslie musical review, Blackbirds of 1928.

Her celebrity began at the age of 16 when director King Vidor, impressed by her vitality in Blackbirds of 1928, hired her to parlay her multi-talented abilities as an actress, dancer, and vocalist in the musical film, Hallelujah (1929). McKinney’s effervescent performance as the seductress, “Chick,” brought her immediate success in Hollywood. Yet despite rave reviews for her vivacious performance and a resulting five-year contract with MGM, McKinney’s career faltered during an era when Hollywood declined to position black actresses in dignified roles.

Determined to break barriers in acting, McKinney immigrated to Europe where she performed in cabarets in Budapest, Hungary; Dublin, Ireland; London, UK; and Paris, France, and appeared in the British films Congo Road (1930) and Sanders of the River (1935), both opposite Paul Robeson. In between promoting her career abroad, she briefly returned to the states where she appeared in independent films Pie, Pie, Blackbird (1932) and Kentucky Minstrels (1934). Though she had minor roles, she was also involved in other Hollywood films such as Safe in Hell (1931), and Reckless (1935). Her last significant Hollywood role was that of a fierce antagonist in the 1949 film, Pinky.

Throughout her career, McKinney maintained versatility in performing arts. During the last two decades of her life, she appeared in several plays and continued to tour globally. Although her potential as an actress was never established, McKinney carved a path for other black actresses such as Dorothy Dandridge, whose character “Carmen” in the 1954 film Carmen Jones was patterned after McKinney’s “Chick.” Nina Mae McKinney died in New York in 1967.