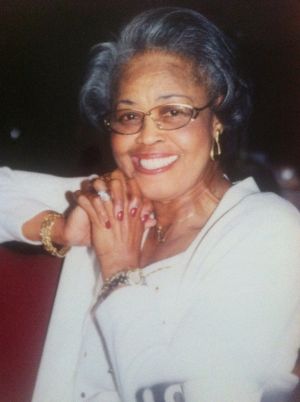 Louise McKinney (née Jones) was an African-American educator, human rights advocate, philanthropist, business woman, community activist, and patron of the arts.  She was a long-established galvanizing force of civic life in Seattle and in the State of Washington.

In 1953 she met and subsequently married Rev. Samuel B. McKinney, a 1952 graduate of New York’s Colgate Rochester Divinity School. They remained married for 59 years and had two children, Rhoda and Lora-Ellen.

Between 1955 and 1958 McKinney lived in Providence, Rhode Island, where her husband served as pastor of the Olney Street Baptist Church.  In 1958 the McKinneys moved to Seattle and for four decades she was the First Lady of Mount Zion Baptist Church.

It was in Seattle during the height of the civil rights movement years that McKinney first began to make a lasting contribution to Seattle and its area schools as teacher, principal, and tireless advocate, set on improving educational opportunities for disadvantaged children regardless of their cultural background or family income. McKinney encouraged and pressured institutions to ensure that capable and gifted African American children got an equal chance at educational opportunities.  In 1994, the year she retired from teaching, McKinney served as Director of Academic Achievement for Seattle Public Schools.

McKinney’s membership on the boards of several local nonprofits (from Bailey-Boushay House to Town Hall) reflected her interests and concerns.  As the wife of the Senior Pastor of Mount Zion Baptist Church, one of the largest black churches in the Pacific Northwest, McKinney was involved with the Mt. Zion Pre-School and Kindergarten, and the Ethnic School, later called the Louise Jones McKinney Learning Center, in her honor, on the board of which she served as an advisor.  The Louise Jones McKinney Reading Area at the Douglass-Truth branch of the Seattle Public Library was also named in her honor.

McKinney also served on the board of Seattle’s ACT (A Contemporary Theatre) Theatre from 1991 to 2003, where she challenged the theater to reflect a broader diversity in its productions and casts.  She then joined the ACT Advisory Board in 2004.  In memory of her service, her name will remain on the roster of the ACT Advisory Board.  In 2007 the Hansberry Project at ACT announced the Louise Jones McKinney Fellowship for African American playwrights.