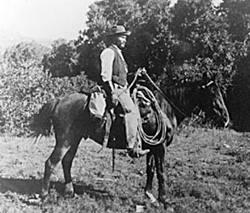 George McJunkin was an African American cowboy known for discovering bison bones in Folsom, New Mexico which eventually made archaeological history.  McJunkin was born in the slavery era in Texas.  His father was a blacksmith.  McJunkin grew up on a ranch and mastered the skills of a ranch hand.  Growing up, McJunkin only received four years of education; he learned to read and write by watching other workers and became literate.  McJunkin worked at various jobs such as buffalo hunting and skinning.  For about fifty years he was also a bronco-buster along the Texas-New Mexico border and at one point was a ranch foreman.

In 1908, McJunkin and a friend, Bill Gordon, found bones sticking out of the ground at the bank of the Dry Cimarron River near Folsom.  The bones where bigger with horns that were different from any McJunkin had ever seen.  McJunkin knew the bones were neither from cattle or buffalo and believe they needed to be studied.  McJunkin attempted to publicize his discovery and feared that it would be ignored or the site would be raided for souvenirs.

Eventually scientists took an interest in his discovery and in 1925 announced that the bones McJunkin had found seventeen years earlier were from extinct bison estimated to be over ten thousand years old.  McJunkin’s discovery led to the subsequent finding of human spearheads that where stuck among some of the bison bones showing that humans were living in the American Southwest far earlier than previously believed.  The archaeological site that McJunkin discovered eventually yielded human remains that became known as “Folsom Man”.

George McJunkin never married nor had children.  He did not live long enough to learn of the scientific recognition of the significance of his discovery.  McJunkin died in January 1922 at the Folsom Hotel in Folsom, New Mexico.