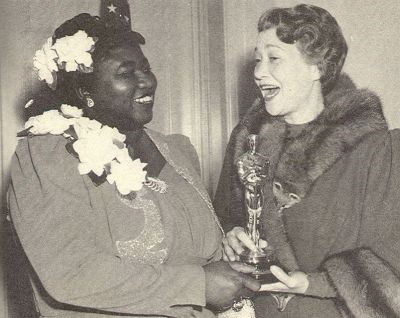 Hattie McDaniel is best known as the first black Oscar winner.  She won the award on February 29, 1940, for Best Supporting Actress for her role as “Mammy” in Gone With the Wind. McDaniel’s career began three decades earlier.  She gave her first public performances as a grade school student in Denver, Colorado. Her father, Henry McDaniel, traveled through Colorado with his own minstrel show but would not allow his daughter to accompany him and her brothers Otis and Sam.  McDaniel was allowed to perform locally with the traveling minstrel shows staged at East Turner Hall in Denver.  In 1910, she won the Women’s Christian Temperance Union’s recitation contest with her rendition of “Convict Joe.”  The audience gave her both a standing ovation and the Gold Medal.  Although only a sophomore, McDaniel insisted that she wanted to perform and convinced her parents that she should quit school to join her father’s show.  She developed a talent for writing songs and dancing.  She also had an excellent singing voice.

After Henry McDaniel retired, Hattie McDaniel looked for other venues and in the early 1920s began to sing with Denver’s well-known Professor George Morrison, a classically-trained violinist whose color prevented him from joining a symphony orchestra.  Instead, he developed an orchestra that played “jazz” songs and traveled the Pantages Circuit through the western states.  McDaniel’s performing abilities soon had her billed as the “female Bert Williams.”  (Williams was an acclaimed black performer of Williams and Walker, an internationally known vaudeville team.)

Hattie McDaniel interspersed her travels with the Morrison orchestra with venues elsewhere, since star billing eluded the majority of African American performers and everyone took work wherever they could find it.  Her biggest break came when she began performing at Milwaukee, Wisconsin’s Club Madrid.  Though originally hired as the ladies room attendant, she ultimately found her way onto the club’s stage and became a featured nightly act.  Convinced that her talent could take her further, McDaniel moved to Hollywood to join a brother and two sisters in 1931.

Despite the fact that Hattie McDaniel, born in 1895, did not live in Denver until she was six and left the city to travel while still a teen, Denverites have always claimed her as their own. She died on October 2, 1952, and was the first African American buried in Los Angeles, California’s Rosedale Cemetery.