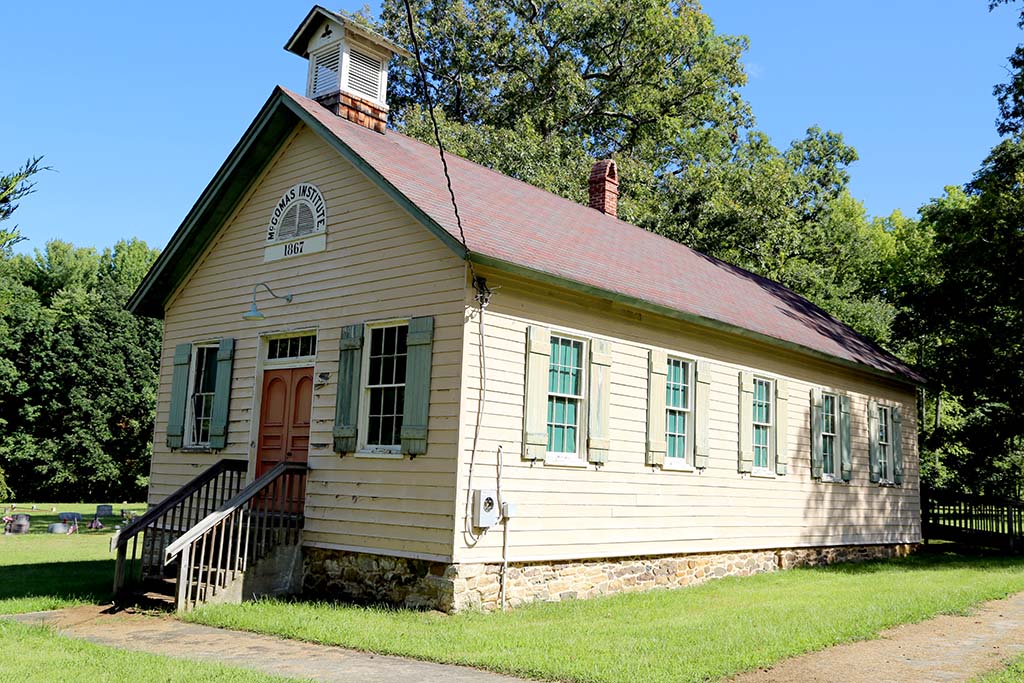 Founded and constructed in 1867 in Harford County, Maryland, the McComas Institute, also known as Mountain School, was built two years following the establishment of the U.S. Freedmen’s Bureau which provided aid to former enslaved blacks and poor whites in the South in the wake of the U.S. Civil War. Located in Joppa, Maryland, the school was one of three Freedmen’s Bureau schools in Harford County. The other two schools were Hosanna School in Darlington, and Greenspring School in Webster.

McComas was named in honor of local abolitionist, George March McComas. The son of William and Ellen McComas, George McComas was an abolitionist, a prominent landowner, and tobacco merchant who worked out of the port of Baltimore. Following the end of the Civil War, McComas appealed to the Freedmen’s Bureau for funds to build a school and a church for African Americans not far from his home in Linwood, Maryland.

The McComas Institute was built on one acre of land purchased for $30. On September 10, 1867, a “colored” couple, George and Mary Ann Johnson, sold one acre of land to Abraham Waters, Charles Waters, Peter Bishop, Joseph Henry, and John H. Butler “for the purposes of erecting or allowing to be erected thereon a schoolhouse for the use, benefit and education of the Colored People of Harford County.”

The Freedmen’s Bureau provided financial assistance for construction to McComas Institute, and it continued to provide financial support until the Bureau was abolished in 1872. That same year, the Harford County Board of School Commissioners assumed operations and partnered with the nearby congregation Mount Zion Methodist Church, which had provided the labor for the construction and held the title to the facility. Church members made up a significant portion of the Institute’s board of directors until the school eventually closed in 1939. Afterwards the building was used by Mount Zion to hold Sunday school classes and church and community events.

McComas Institute was home to a number of pioneering black educators in the state of Maryland, including Mrs. Alma Mae Dorsey Nelms. In the late 1930s, she served as the sole teacher at McComas Institute, instructing grades one through seven. Local civil rights activist and Harford County educator, Janice East Morehead Grant, a former student of Mrs. Nelms, noted that her teacher educated “78 students comprising 7 grades [after walking] miles in the cold, making fires in a potbellied stove, and carrying water for us to drink.”

On September 8, 1980, McComas Institute was listed on the National Register of Historic Places. Nearly three years later, with the help of state funding, building restoration projects began in 1983. In 1995, the building was finally restored through the lobbying efforts of Mrs. Christine Tolbert, Executive Director of Hosanna Community House, Inc. and its board members.