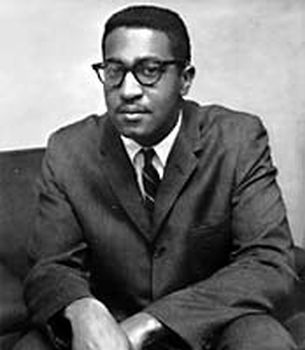 Franklin McCain was born on January 3, 1941 in Union County, North Carolina.  He grew up in Washington, D.C. but returned to his native North Carolina to attend college at North Carolina Agricultural and Technical State University. McCain and his roommate, David Richmond, had followed the progress of the Montgomery Bus Boycott in Alabama and felt that they should do something to contribute to the movement for social change. On Monday February 1, 1960 McCain joined the rest of the “A & T Four” (Joseph McNeil, Ezell Blair, Jr. and Richmond) in sitting-in at a segregated F.W. Woolworth lunch counter. The following day, two dozen students from North Carolina A & T and Bennett College joined the protest. By the end of the week 3,000 students were picketing in downtown Greensboro. The movement rapidly spread to 54 cities in nine other southern states.

McNeil, Richmond, Blair and McCain agreed that their anger at injustice had been transformed into a commitment to resist oppression. McCain and his friends watched the protest turn into a community wide effort. Support for the demonstrations came from Dudley High School, the local NAACP, and although “the [A & T] Administration was subjected to various types of pressures to keep us in line,” A & T President Warmoth T. Gibbs refused to discipline the students. McCain later said that he loved Dr. Gibbs “as a human being and as a teacher.” Dr. Martin Luther King, Jr. attributed the increased momentum of the civil rights struggle to the implosion committed youth, signaled by actions of McCain and his friends. The “Greensboro Four” soon lent their support to the formation of the Student Nonviolent Coordinating Committee (SNCC) under the leadership of Ella Baker at Shaw University in Raleigh. They inevitably became national symbols of the struggle for racial justice.

After graduating from A & T as a chemist and biologist McCain was hired by Celanese Corporation in Charlotte, North Carolina. He married Betty Davis, had three sons, and continued to be an oral historian of the movement. McCain was a member of Sigma Pi Phi fraternity.

Franklin Eugene McCain died in Greensboro, North Carolina on January 9, 2014.  He was 73.