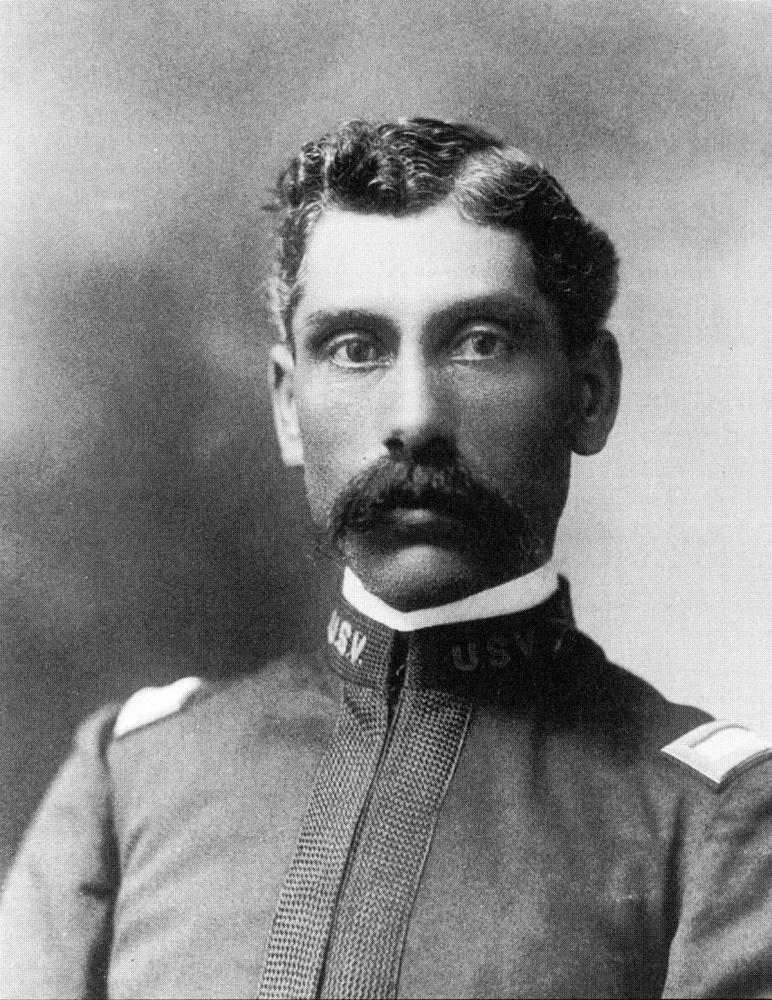 William McBryar was a biracial buffalo soldier whose received the Medal of Honor for his participation in the 1890 Cherry Creek Campaign in Arizona Territory. McBryar was born on February 14, 1861 in Elizabethtown, North Carolina to Rose McBryar, an African American, and a white father whose name is unknown. McBryar attended St. Augustine’s Normal College (now St. Augustine’s University) in Raleigh, North Carolina in 1883 but didn’t finish.

In 1887, McBryar, then living in New York City, New York, enlisted in the Company K, 10th U.S Cavalry, one of the four original buffalo soldier regiments.  Three years later he was on assignment in Arizona Territory and fought in the Cherry Creek Campaign which began on March 7, 1890 when word reached Fort Thomas, Arizona Territory, that five Apaches had ambushed and killed Fred Herbert, a Mormon freighter, nine miles west of the Fort on March 2.  K Troop of the 10th U.S. Cavalry was assigned to track down the Apaches who had allegedly committed the murder.

Four years later, in 1893, McBryar was transferred to Fort Custer, Montana where he was assigned to the 25th Infantry Regiment, another buffalo soldier unit.  McBryar was promoted to Quartermaster Sergeant. McBryar fought in the Spanish-American War in 1898. He and the 25th Infantry took a key Spanish outpost at Guantanamo Bay in Cuba. Although only a sergeant, McBryar was given command of H Company’s Second Platoon and as commander ordered the assault on the Spanish block house.  Despite his military exploits, the greatest danger he faced in Cuba was a life-threatening bout with malaria.

McBryar was promoted to Lieutenant for the Eighth U.S. Volunteer Infantry but later rejoined the 25th Infantry, enlisting as a private since the Eight Volunteers were defunct by 1899.  He and the 25th were immediately assigned to the Philippines to help quell the rebellion there against the U.S., which had just annexed the islands.

After the rebellion ended in 1903, McBryar return to the United States where he was assigned to Fort Leavenworth, Kansas.  Two years later, McBryar, at age 44, was medically discharged from the Army because of rheumatism.  At 56 McBryar tried to re-enlist for World War I but declared too old for military service.  He then served as a watchman at the Arlington National Cemetery.

In 1924, 63-year-old McBryar became an instructor of military science at St. Paul’s College, a small HBCU in Virginia. He taught there until 1928 and again 1935. In 1934, at the age of 73, McBryar graduated from Tennessee Agricultural and Industrial State College (Now Tennessee State University) with a Bachelor of Science degree in Agriculture.

McBryar married Sallie B. Waugh on December 6, 1906 in Greensboro, North Carolina. The childless couple remained together until Waugh’s death in 1928.  McBryar later married Lucy E. Sweatt in 1933. They divorced in 1938.

William McByar died in Philadelphia, Pennsylvania on March 8, 1941 at age 80.  In 2018, he was honored with a historical marker at Tennessee State’s main campus in Nashville.