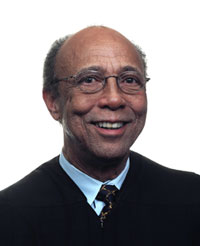 William Eugene McAnulty, Jr. was the first black justice to serve on the Kentucky Supreme Court and the first black person to ever hold a cabinet level position in Kentucky state government. Justice McAnulty was appointed to the state Supreme Court in June 2006 by Kentucky Governor Ernie Fletcher to fill the spot of retiring Justice Martin Johnstone; he was then elected to keep the position the following November.

McAnulty was born October 9, 1947 in Indianapolis, Indiana to Ann Moss, and William McAnulty, Sr., a mailman. McAnulty and his two sisters, Patricia and Jean, were raised as members of the city’s black middle-class community. Upon graduation from Shortridge High School and before enrolling in Indiana University, McAnulty worked in the Indiana governor’s office as a clerk.

After earning his bachelor’s degree at Indiana University in 1969, McAnulty continued his studies, earning his master’s degree in education in 1971, as he originally wanted to become a special education teacher. In 1974 he earned his Juris Doctorate from the University of Louisville.

Upon graduation, McAnulty in 1975 became a judge for the Jefferson County Juvenile Court in Louisville, Kentucky. Two years later he was elected to the Jefferson District Court, and three years after that was appointed by Governor John Brown, Jr. to be Secretary of the Justice Cabinet, making McAnulty the first black person to ever hold a cabinet level position in Kentucky. McAnulty, however, stepped down after a month because living in Frankfort, the state capital, he was unable to spend enough time with his wife and young children, and resumed his previous judicial position at the district court in Louisville.

In 1983 McAnulty was elected to the Jefferson Circuit Court where he remained for seven years until rejoining the private practice at the business law firm Greenbaum, Doll & McDonald. Eventually he became a partner.  In 1993, McAnulty took the Chief Judgeship after being reelected to the Jefferson County Circuit Court. He remained chief judge until 1998 when he was elected to the Kentucky Court of Appeals, his last position before joining the Kentucky Supreme Court in 2006.

McAnulty was well respected and trial lawyers especially noted his impartiality, and higher courts overturned fewer than 10 percent of his decisions while on the circuit court. McAnulty earned numerous awards throughout his career, including the Henry V. Pennington Outstanding Judge of the Year Award; the Louisville Bar Association Judge of the Year Award; the Kentucky Trial Attorneys Association Award; the Metro United Way’s Allen Society Leadership Award; the Thomas C. Simons Leadership Award; and the Distinguished Alumni Award from the Louis D. Brandeis School of Law at the University of Louisville, in addition to many other recognitions. McAnulty was also heavily involved in the community and was a member of multiple programs such as the YWCA Spouse Abuse Center, Kentucky Youth Advocates, and the Children Placement Project.

Justice William E. McAnulty Jr. passed away on August 23, 2007, fourteen months after he was appointed to the bench, after losing his battle with lung cancer that had spread to his brain. He is survived by his wife, Kristi, and children, William III, Katheryn, Shannon, and Patrick. Since his passing, a bust of Justice McAnulty has been placed on permanent display in the vestibule of Kentucky’s Supreme Court chamber in his honor.