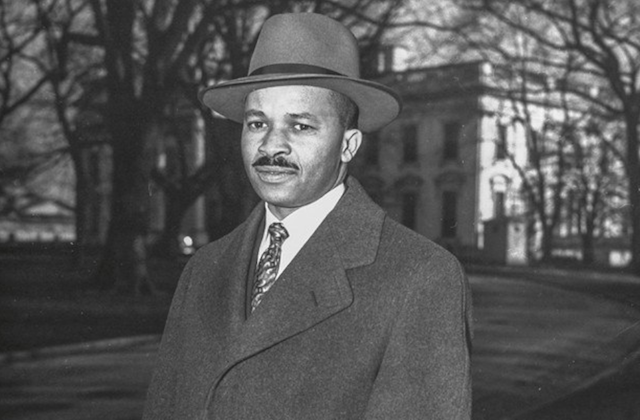 Harry McAlpin outside the White House, 1944
Fair use image

Harry S. McAlpin was the first African-American reporter to attend a press conference at the White House. McAlpin was born in St. Louis, Missouri on July 21, 1906. He grew up in St. Louis and then attended the University of Wisconsin where he studied journalism and advertising and received his degree in 1926. McAlpin then moved to Washington, D.C. to pursue a career in journalism. From 1926 to 1929, he was a reporter, editor, and office manager at the Washington Tribune, an African American newspaper published weekly. From 1929 to 1933, McAlpin went on to work for the National Benefit Life Insurance Company, handling publicity and advertising.

In 1933, McAlpin joined the New Negro Alliance with the goal of protecting black employment opportunities in the National Recovery Administration (NRA) program. He also enrolled in the Robert H. Terrell Law School in Washington, where he took classes at night. In the day he worked for the Federal Security Agency and the U.S. Employment Service.  McAlpin passed the District of Columbia bar exam in 1937 and afterwards he started working for Mary McLeod Bethune, Director of Negro Affairs at the National Youth Administration (NYA), as well as for the Chicago Defender as a part-time Washington correspondent.

In 1943, the National Negro Publishers Association (NNPA) successfully petitioned the White House Correspondents Association (WHCA) for press credentials, which resulted in the NNPA opening its own Washington bureau. McAlpin was hired as its first full-time Washington correspondent there. He was invited to attend his first Presidential press conference in 1944. Despite opposition from the White House Press Correspondents Association which declared its unwillingness to share notes with McAlpin or grant him membership in the Association, McAlpin went to the Oval Office for his first press conference and was personally greeted by President Franklin D. Roosevelt.

McAlpin left the NNPA and moved to Louisville, Kentucky, to work as the only African American assistant commonwealth attorney in the state until 1953. He resigned after being dropped from a criminal prosecution case of three white women. Kentucky prosecutors felt his presence on the case would violate gender and racial norms in the state at the time.  After resigning, McAlpin became leader of the Louisville chapter of the National Association for the Advancement of Colored People (NAACP). He eventually returned to Washington, D.C. in 1968 and worked as a hearing officer for the Social Security Administration before going back to Louisville to practice law in his seventies.

Harry S. McAlpin passed away on July 18, 1985 days before his 79th birthday. McAlpin was married and had a daughter and son, Sherman. He was later honored by the White House Correspondents (WHCA) the same organization that had opposed his presence 70 years earlier, at their annual dinner on May 3, 2014. A scholarship was created in his honor and he was recognized by President Barack Obama for being a pioneer in journalism.