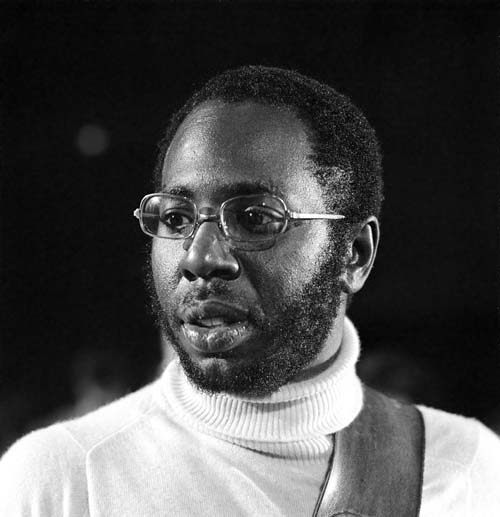 Singer, guitarist, songwriter, and music producer Curtis Lee Mayfield was born on June 3, 1942 in Chicago, Illinois. Mayfield began his career singing gospel music with the group the Northern Jubilee Singers. While with them he met Jerry Butler, another aspiring singer, and in 1957 they form the rhythm and blues (R&B) group, the Impressions.  In 1958, Mayfield and Butler, along with Sam Gooden, and Richard and Arthur Brooks, the other members of the group, recorded, “For Your Precious Love,” which soon became a soul music classic. Butler left the group in 1958 to pursue a solo career and Mayfield then became its lead singer.  Mayfield also played lead guitar and wrote and produced much of the group’s music.

The 1960s proved to be the most successful decade for the Impressions.   During those years they recorded 14 Top Ten songs including “Gypsy Woman” in 1961, which reached #2 on the Billboard R&B charts.  “Gypsy Woman” was followed by a series of songs that were inspired by the civil rights movement and later the Black Power era. They included “It’s All Right” in 1963,  “Keep on Pushing” in 1964, “People Get Ready” in 1965, and “We’re a Winner” in 1968.  Besides achieving recording success during this period, Curtis Mayfield and the Impressions became the leading artists identified with black music that featured “social commentary.”

In 1968 Mayfield became one of the first African American artists to own a recording studio and production company.  Both were located in Chicago.  Mayfield also formed Curtom Records in 1970, an independent label that allowed him to write and produce hit records for artists such as Gladys Knight and the Pips, Aretha Franklin, and the Staples Singers.

In 1970, Mayfield left the Impressions to pursue a solo career in the newly developing funk music genre.  Although he would record the commercially successful albums Curtis in 1970 and Curtis/Live! in 1971, his soundtrack for the movie Superfly in 1971 gained him the most recognition.

Mayfield’s popularity began to decline by the mid-1970s although he continued to record and perform into the 1980s.  On August 13, 1990, while performing during an outdoor concert in Brooklyn, New York Curtis Mayfield was struck on the head by a falling light structure.  The blow paralyzed him from the neck down.  Although he no longer performed, he continued to dictate songs.   In 1996 he released a book of poetry and song lyrics titled “In Poem and Song.”

Curtis Mayfield has the distinction of being one of the few artists inducted into the Rock n’ Roll Hall of Fame twice, once with the Impressions in 1991, and again as a solo artist in 1999. On December 26, 1999 Curtis Lee Mayfield died in Atlanta, Georgia, leaving behind a wife, and ten children.