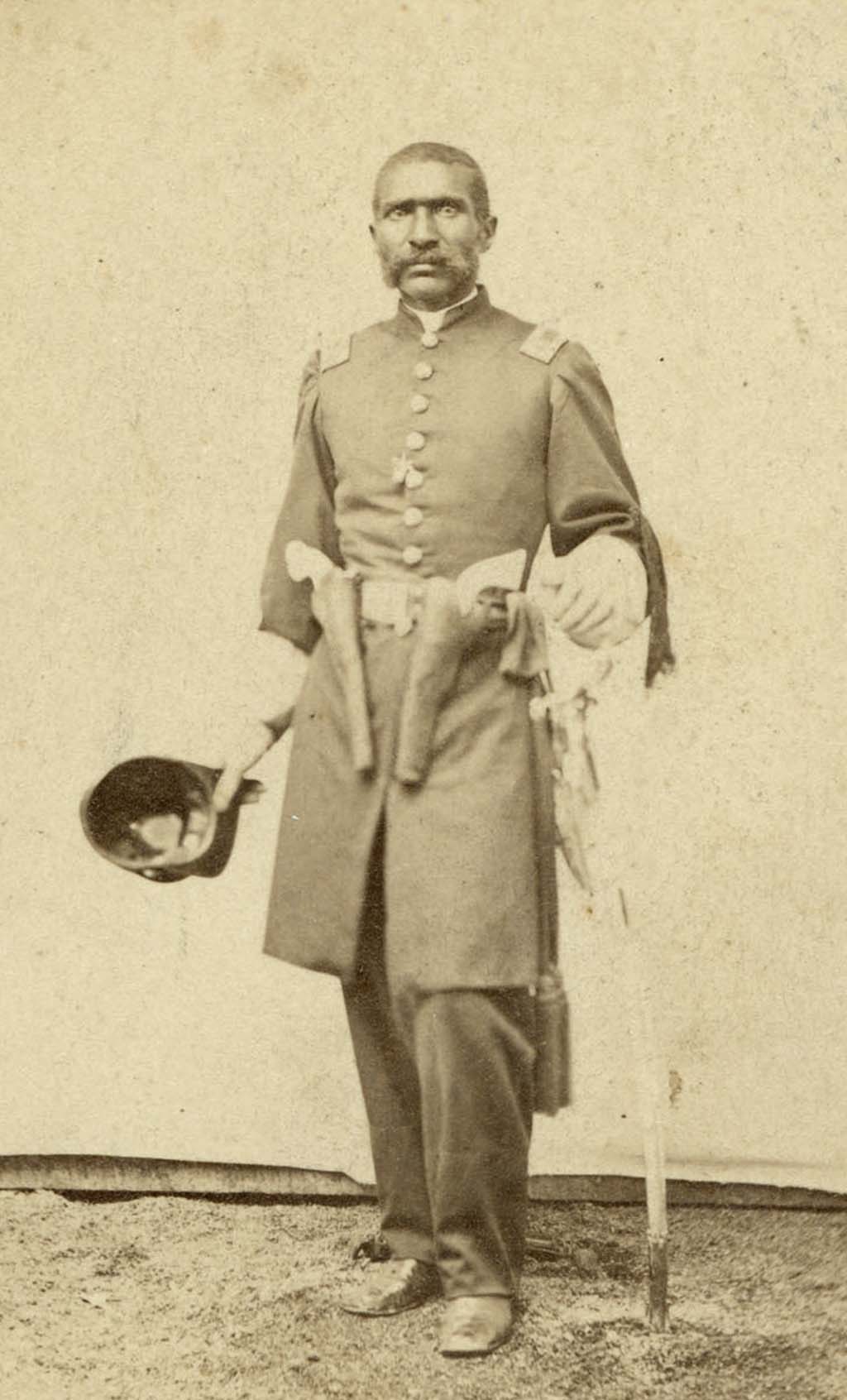 William Dominick Matthews was a Civil War officer in the Union Army and is best known for leading the First Kansas Colored Volunteer Infantry. Matthews was born a free man in October 25, 1827, on the eastern shore of Maryland. His father Joseph was a native of Delaware and of African ancestry. Matthews’s mother was the daughter of an enslaved woman and a Frenchman, but she eventually gained her freedom when her father passed away.

In 1840, thirteen-year-old Matthews moved to Baltimore and worked as a sailor until he acquired a commercial ship of his own in 1854, which he sailed on both Chesapeake Bay and the Potomac River. He left Maryland for Leavenworth, Kansas, in 1856 because the discriminatory laws in his home state made it difficult for him to earn a living.

In Leavenworth, Matthews soon became a successful businessman. He was also involved in helping escaped slaves via the Underground Railroad. In 1860, Matthews converted his home into a station for the railroad to help fugitive slaves escaping from neighboring Missouri, Arkansas, and Indian Territory. Because he had to worry about retaliation by pro-slavery forces across the river in Missouri, Matthews organized one hundred mostly African American men to protect the home when fugitive slaves were hiding there.

When the Civil War began in 1861, Matthew attempted to offer his men to the national government to fight in the Union Army, but they were turned away because African Americans were not permitted to enlist.  In 1862, U. S. Senator James H. Lane of Kansas ignored federal regulations in regard to African Americans in the army and allowed black men to enlist in the war effort in Kansas.

Matthews took that opportunity to establish his own company of soldiers and convinced a number of ex-slaves to enlist. He was soon made captain of the First Kansas Colored Volunteer Infantry, a regiment that soon totaled six hundred men. Matthews was, at that point, the highest-ranking black officer in the Union Army. On October 29, 1862, troops under Matthews’s command fought and defeated Confederate forces at the Battle of Island Mound in Bates County, Missouri. This battle is generally recognized as the first known engagement for black troops who participated in during the Civil War.

The Emancipation Proclamation of 1863 signaled the formal acceptance of black soldiers into the United States Army. Unfortunately, Matthews was stripped of his captain’s rank and replaced by a white officer who was made captain of the First Kansas Colored Infantry. Matthews served as a non-commissioned officer with the First Kansas Colored almost until the end of the war but was finally promoted in 1865 to the rank of first lieutenant in the Independent Colored Kansas Battery, also known as the Independent Battery, U.S. Colored Light Artillery. That unit was commanded by another black Kansan, H. Ford Douglas.

Matthews returned home to Leavenworth in October 1865 after the Civil War. He and his wife Fanny raised four children. He became involved in local politics and became an important figure on the Kansas State Republican Central Committee. Very little is known about Matthews after 1870. On March 2, 1906, William Dominick Matthews passed away quietly at his home in in Leavenworth, Kansas.  He was 78 at the time of his death.