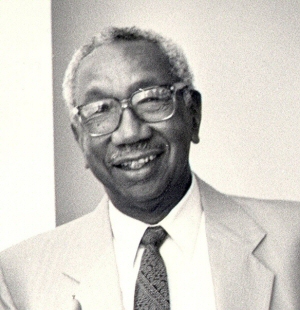 Prominent social and civic leader in African American Seattle, Washington, Meredith Mathews was born in Thomaston, Georgia on September 14, 1919.  He attended public schools in Georgia and then moved to Ohio for college.  He received his Bachelor of Science degree from Wilberforce University in Xenia, Ohio in 1931.  He then pursued graduate studies at Ohio University.

Mathews arrived in Seattle in October 1957 after being named Executive Director of the East Madison YMCA. This “Y” served the mostly African American community of central Seattle.  The fund raising and business management skills he had developed in Oklahoma were used to expand services, memberships, and programs at this Seattle branch.  A new facility was built in 1965 after a successful Capital Funds Campaign under his leadership.  That facility continues to house the YMCA.

Mathews was involved in other civic and social organizations in Seattle. In the 1960s he was active with the Central Area Committee for Civil Rights (CACRC), an organization of leaders and activists who directed the civil rights movement in Seattle.  He served on the boards of the Seattle Urban League and the Randolph Carter Family and Learning Center named after his friend, social worker Randolph Carter.  He was a Mason and at the time of his death, he was the oldest living member of Alpha Phi Alpha Fraternity in the Seattle area. In 1965 he was one of 11 founding members of the Alpha Omicron Boule of the Sigma Pi Phi Fraternity.

Mathews’ wife, Henrietta, was a social worker whose name was given to the Gideon/Mathews Gardens, a housing community for low income and disabled citizens.  The couple had two sons, Christopher and Meredith, Jr.

On March 19, 1992, Meredith Mathews died in Seattle as a result of injuries he sustained during a robbery and assault at his home in Seattle.  He was 73.  During his life and after his death the YMCA and other community groups honored his service and his leadership.  In December 1993, the YMCA of Greater Seattle Board of Directors named the East Madison YMCA the Meredith Mathews East Madison YMCA.  This was the first YMCA facility in the Seattle metropolitan area to be named for an individual.  Two years later, in 1995, his name was placed in the YMCA Hall of Fame in Springfield, Massachusetts.