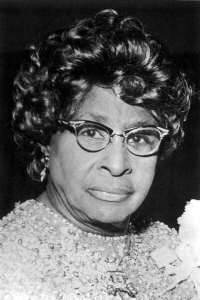 A gospel singer and arranger, Sallie Martin was born near Atlanta, Georgia.  In her early twenties she began singing in a church choir in Cleveland, and, by 1929, had moved to Chicago and joined a chorus directed by Thomas Dorsey, later known as the Father of Gospel Music.  With him, in 1933, Martin co-founded the National Convention of Gospel Choirs and Choruses.  During the remainder of the 1930s, she served as Dorsey’s song demonstrator and bookkeeper, singing and selling his compositions at churches and conventions.  In some churches Martin encountered resistance, “because, you see, they didn’t like the idea of you having rhythm…but I got saved patting my feet…it would be impossible for me to just absolutely stand still and sing.”

In 1940, she left Dorsey to help start the Martin and Morris Publishing Company, which published the famous Just a Closer Walk with Thee.  This song made a name for the Sallie Martin Singers, one of the first all-female gospel groups, and helped usher in the golden age of gospel during the 1940s and 1950s.  Her involvement with publishing lasted 30 years, and in a 1981 interview, Martin commented, “I think gospel music is a thing of the soul.  People sing it if they’re burdened; then again, if they feel happy, they can give it out like that…People will get a message that there must be something behind this.  There must be a God or something.”  For her many contributions, Martin has been called the Mother of Gospel Music.