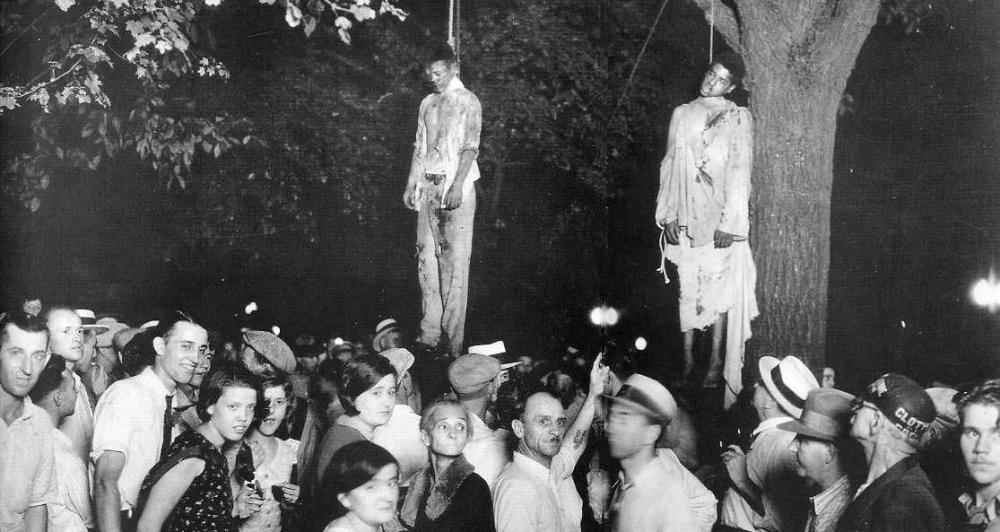 On August 7, 1930, a mob of ten to fifteen thousand whites abducted three young black men from the jail in Marion, Indiana, lynching  Thomas Shipp and Abram Smith. Sixteen-year-old James Cameron narrowly survived after being beaten by the mob. Lawrence Beitler’s photograph of the two victims’ hanging bodies is regarded as one of the most iconic images of an American lynching.

The night before the lynching, Claude Deeter, a 23-year-old white man, was shot and taken to the hospital, where he died the next day. His fiancée, nineteen-year-old Mary Ball, reported that the men who shot Deeter had raped her; however, she later recanted her claim. Police arrested Shipp, Smith, and Cameron, charging them with murdering Deeter and raping Ball.

While Claude Deeter lay dying in the hospital and the three accused men awaited trial in jail, news of the crime, along with the planned lynching of the alleged perpetrators, spread across Indiana. After Deeter passed away in the afternoon, whites arrived by the thousands from out of town and joined local residents outside the jail. The mob demanded that the three imprisoned men be turned over to them. When the sheriff refused, several young men in the crowd broke into the jail using sledgehammers.

Thomas Shipp was pulled out first; the mob beat him and hanged him from the window bars of the jail. The crowd then dragged Abram Smith down the street to the courthouse and prepared to hang him from a large tree. When he tried to remove the noose from his neck, the mob stabbed him and broke his arms before finally hanging him. Once the mob had brought Shipp’s lifeless corpse over to hang next to Smith, local photographer Lawrence Beitler was called over to take a photo of the crowd and the two hanged men.

Finally, the mob returned to jail and abducted James Cameron, beating him and taking him to be hanged next to the other two men. However, a voice from the crowd suddenly rang out, proclaiming Cameron’s innocence, and the crowd calmed down. The police took him to another jail out of town; later, he was convicted of accessory to Claude Deeter’s murder and served four years in jail. Despite photographic evidence and eyewitness testimony, no one in the lynch mob was ever arrested.

The iconic photograph of the incident inspired Abel Meeropol to write the poem and song “Strange Fruit,” which Billie Holliday recorded in 1939. In the decades since, dozens of artists have covered and/ or sampled the song; while the lyrics never explicitly mention lynching, they paint a poignant and disturbing picture.

Southern trees bear a strange fruit,
Blood on the leaves and blood at the root,
Black body swinging in the Southern breeze,
Strange fruit hanging from the poplar trees.

Pastoral scene of the gallant South,
The bulging eyes and the twisted mouth,
Scent of magnolia sweet and fresh,
And the sudden smell of burning flesh!

Here is a fruit for the crows to pluck,
For the rain to gather, for the wind to suck,
For the sun to rot, for a tree to drop,
Here is a strange and bitter crop.