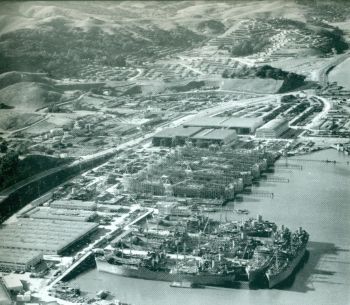 In 1940, Marin City did not exist. During World War II, however, the W.A. Bechtel Company of San Francisco was given the contract to construct transport vessels for the U.S. Navy. It created Marinship, which during World War II built nearly 100 liberty ships and tankers. The Bechtel Company was also given permission to develop a community to house some of its workers. That community, Marin City, would eventually be hailed as a model city for the company’s workers and a bold social experiment in race relations.

Marin City was located along the western shore of San Francisco Bay, about two miles northwest of downtown Sausalito. Its first buildings were constructed in 1942 to house workers at the Marinship facility in neighboring Sausalito. Marin City, re-designed by Aaron Green, a prominent architect affiliated with Frank Lloyd Wright, initially had no mayor, no city council, nor a city hall. Besides housing for shipyard workers, it had in 1942 a mercantile building with a drug store, department store, beauty salon, a soft drink and candy shop. A public school was built for worker’s children. One year after its founding it had a population of 5,500 with African Americans comprising 10% of that total.

Single men were housed in dormitories that rented for $5.50 a month which included 24-hour housekeeping service, medical service, game rooms, a gymnasium, coffee shop and cafeteria. Redwood homes for single people and families were built into the hillside with panoramic views of San Francisco Bay and rolling hills of Marin County. Rentals for these homes ranged from $29.00 per month for a furnished one-room apartment with bathroom and kitchen to an average $40.00 per month for a six-room unfurnished house.

By summer 1942, the demand for workers at Marinship generated recruitment efforts which extended beyond California into the Midwest and the South. At its peak in 1944, Marinship employed 22,000 workers from every state in the Union with many of them living in Marin City. During an era when segregation was widely practiced in California as well as across the South, Marin City was a surprisingly diverse, racially integrated community.

Most of the original housing has been razed and the community has been rebuilt over four decades between 1960 and 2000.  In 2010, Marin City’s population was 2,666 and 37% African American.  This small community’s most famous resident was the actor and musician Tupac Shakur.