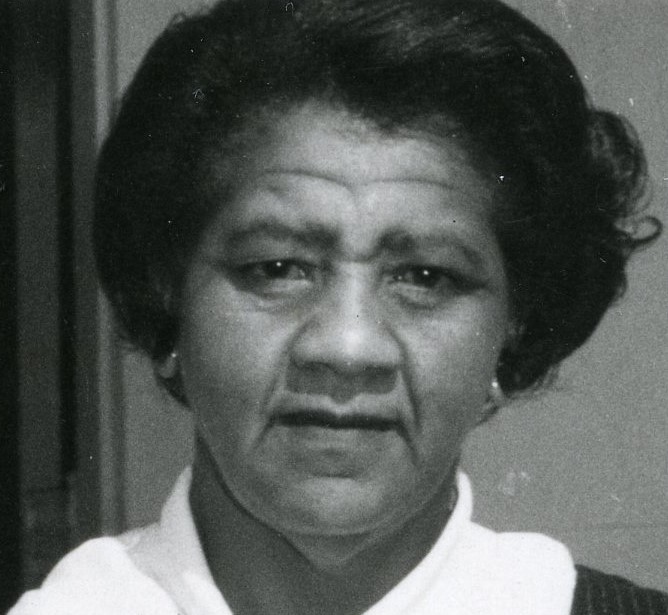 Marie Walker Johnson was a Black Creole civil rights activist in Oakland, California, during the 1960s. A mother of five and a nurse, she also played a crucial role in multiple grassroots groups in the East Bay area. In these organizations, she marched, wrote letters, gave speeches, attended court hearings, and wrote articles for the newspaper. Throughout her life, Johnson advocated for the rights of individuals and families treated unfairly.

She was born Marie Clara Delpit on July 19, 1921, in New Orleans, Louisiana, to Henry Delpit and Leontine Sorina. As a child, she attended Catholic school. In 1943, when Marie was twenty-one years old, she married Henry Steven Walker, also a Black Creole. She already had two little girls whom Henry helped raise following their marriage.

In 1944, after the birth of their first son, the family moved to California. In the years after their move, the Walkers had two more children. The family lived in poverty, with Henry working as a hod carrier and a bricklayer until his final illness. At that point, Marie became a nurse to support the family. In 1959, Henry passed away, and in February 1967, Marie married Jacob Johnson. From then on, she typically went by Marie Walker Johnson, even after the couple divorced in June 1970.

Decades of racist housing and employment practices contributed to the poverty of Black Oaklanders and their concentration in small areas of the city, including neighborhoods where Johnson lived. In response, some of her Black neighbors began a small newspaper called The Flatlands to unify the poor, serve as a voice for their challenges, and inspire them to act. The Flatlands published several articles by Johnson and frequently described her activism. She also wrote articles for the Black Panther, the newspaper of the Black Panther Party. A frequent theme in her writing was the dehumanizing treatment of the police toward Black people.

Marie Walker Johnson served as secretary of several Oakland and East Bay Area organizations, including the local Welfare Rights Organization, Citizens for Equal Opportunity, and the Ralph S. Williams Campaign Committee. She also became one of the older members of the Black Panther Party and joined Black Strike for Justice. In addition, she was a founding member of the Committee for Children and the founding secretary of Blacks Unified to Motivate Progress (BUMP). When BUMP organized the 1967 Freedom Festival celebrating Juneteenth, Johnson was the program coordinator for the event. She also participated in Stop the Draft Week demonstration in October 1967, where she was beaten by the police. In 1969, Johnson cofounded the revolutionary feminist anti-war group, Woman Power which said the U.S. government had “relinquished its right to rule” and called for revolution.

After a life dedicated to serving the disadvantaged in her community, Marie Walker Johnson died in 1974 at 53. She is buried next to her first husband, Henry Walker, at the Saint Joseph Catholic Cemetery in San Pablo, California.