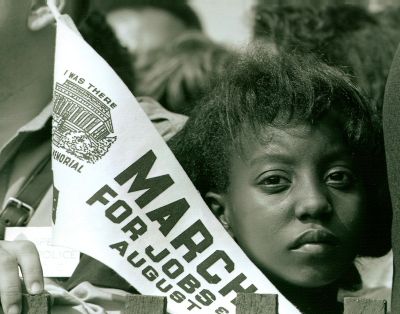 Edith Lee-Payne at the March on Washington, 1963
Photo by Rowland Scherman, Courtesy US National Archives

In the account below Edith Lee-Payne recalls the day she was photographed as a 12 year old participant in the March on Washington, and the curious history of that photograph through 2011.

My grandparents, Marie and John Spencer Lee, left Culpeper, Virginia for Washington, D.C. in the early 1900s, where my mother Dorothy Lee was born. My mother settled in Detroit, Michigan in 1940, married William Henderson Lee in 1947, and I was born four years later.  Summer vacations were always spent in Washington.  My 1963 summer vacation, however, is forever marked in history and my personal memory, because I was there when the March on Washington for Jobs and Freedom took place on August 28, 1963.  That March, which took place on my 12th birthday, changed me and transformed the nation.

Dr. Martin Luther King’s “I Have a Dream” speech is by far the best remembered moment at the March on Washington.  King gave the speech before an audience of 250,000 gathered at the foot of the Lincoln Memorial.  With the giant statue of Abraham Lincoln in the shaded background, Dr. King described a world he envisioned as dominated by love, freedom, and justice.

I heard the speech that day but I also heard a similar one two months before in Detroit.  On June 23, 1963, Rev. Dr. Martin Luther King Jr. and Rev. C. L. Franklin (Aretha Franklin’s father) led a march of over 100,000 people down Woodward Avenue to Cobo Hall in downtown Detroit.  Dr. King encouraged us to join him and others in Washington, D.C. on August 28 for a peaceful demonstration that he believed would help bring attention to the injustices of segregation throughout the south. He reminded us “injustice anywhere is a threat to justice everywhere.” Convinced by Dr. King’s rousing discourse and other reasons I later learned, my mother scheduled our annual summer vacation so we could attend the March on Washington while celebrating my 12th birthday.

Both in Detroit and Washington, Dr. King used the refrain “I have a Dream.”  Detroiters still contend the “I Have a Dream” speech made famous in Washington, D.C., was actually given first in Detroit.  We already lived the dreams Dr. King envisioned for all Americans across the nation, particularly in the south.  My neighborhood, on Detroit’s northwest side, was racially integrated.  The schools I attended, Wingert Elementary and Condon Jr. High, were integrated.  Our family church, Carter Metropolitan Christian Methodist Episcopal, was integrated and included interracial families.  My mother and I dined at restaurants, sat at lunch counters served by white and/or black waitresses, without incident. We drank from water fountains without signs distinguishing “color.”  My mother never learned to drive so busses and cabs were our primary mode of transportation, also without concern of any consequence or incident.

It was inconceivable to me to know that people who looked like I did, and separated from Detroit by a few hundred miles, suffered such horrific experiences and limitations in their daily lives and often risked death.  Cross burnings, beatings, lynchings, and murders were incidents reported regularly in the periodicals my mother subscribed to including Ebony and Jet magazines and Detroit’s African American newspaper, The Chronicle.  Mississippi Civil Rights activist Medgar Evers was one of many lives tragically sacrificed just months before the March on Washington.  Even at 11, I knew that young people like me were risking their lives to participate in demonstrations in Birmingham and elsewhere across the South for the freedoms that were part of my daily life.  I came to realize that what I learned in school about the Constitution, the Emancipation Proclamation, freedom, and opportunity, led me to question the validity of these documents and concepts.  There were no exceptions in these documents allowing these dreadful experiences to happen, yet they did.

It appeared to me that a million people converged on the Lincoln Memorial in Washington, D.C. that hot, humid day in August.  Busses marked with names of cities from across the country endlessly lined the streets.  Dr. King’s message of non-violence, resistance against segregation and discrimination came through clearly again in his “Southern preacher” voice that I first heard in Detroit two months earlier.  The March in Detroit was a testament to the peaceful demonstration Dr. King referred to as thousands of people assembled in support of the civil rights struggles in the South.  This March on Washington included not only people in support of the civil rights struggles, like my mother and I, but the people who aspired for the freedoms and privileges they were entitled to; many of whom undoubtedly suffered violence while exercising their First Amendment right to peacefully protest injustice.  This March was a testament of an entire nation of all people of every race, creed, color, and religion, standing together in the Christian spirit of love, unity, and peace.

As I listened to Dr. King and others who spoke, the simultaneous expressions of pain, anger, hurt, helplessness, despair, and hope, especially hope, was evident in the eyes and on the faces of people around me, including my mother.  Although I knew my mother was a professional dancer who shared the stage with prominent entertainers during the 1930s and 1940s, such as Cab Callaway, Billy Eckstein, Ella Fitzgerald, and Sammy Davis Sr. I learned for the first time about the injustices she encountered as she and other entertainers traveled across the South.  I overheard my mother’s brief conversation with Lena Horne where they both recalled frightening experiences and observations.  Then I realized that the tears on her face that day were not simply out of compassion for others struggling for freedom in the South, they were reminders of what she had personally witnessed and felt.

The significance of the March on Washington left an indelible memory that I appreciate with each passing year.  That day in history helped bring the enactment of the Civil Rights Act of 1964 and the Voting Rights Act of 1965 which helped make segregation and discrimination illegal and ensured millions of southern blacks access to the ballot.  Thanks to my mother, I garnered a place in history that day as well, although I wouldn’t know about it for another 45 years.

In late October 2008, my cousin Marsha phoned saying she saw a picture of me on the cover of a 2009 Black History Calendar.  She said I was holding a banner displaying “March for Jobs” and the month “August,” the only words visible in the photo.  I recalled holding a banner at the March on Washington that I still have.  Marsha described that the other images in the calendar included:  Dr. King, Frederick Douglass, Sojourner Truth, Jesse Owens, Langston Hughes, and W.E.B Dubois, and that the photos were courtesy of a museum.   Searching the picture’s origin led me to the National Archives and Records Administration (NARA) where I learned from archivist Rutha Beamon of three photos of me in its holdings. My mother is in two of the photos making them the most special since she is no longer with me.

What an incredible blessing and humbling experience that an image taken of me, captioned by the NARA, “Photograph of a Young Woman at the Civil Rights March on Washington D.C. with a Banner” has been viewed in articles, publications, and documentaries around the world.  Equally humbling, is to be associated with the greatest non-violent march in this nation’s history and with its most prominent leader, Dr. Martin Luther King Jr.  Most notably, the photo appears in the Martin Luther King Jr. Memorial brochure and the documentaries, “From MLK to Today,” by movie director Antoine Fuqua and the NARA’s “March on Washington Photographs.”

Thanks to Mark Katkov of the NARA I learned that Rowland Scherman was the photographer who captured my raw emotions on that August day in 1963.   Mr. Scherman happened to visit the NARA in the fall of 2011 identifying images of his work from the March on Washington, including the images of me.   Mr. Scherman and I plan to meet soon.

Hurricane Irene prevented the scheduled August 28, 2011 dedication of the Martin Luther King Jr. Memorial, that would have marked the 48th anniversary of the 1963 March on Washington and my 60th birthday; however, I returned to Washington, D.C. for the rescheduled celebration on October 16, 2011.  Ironically, this was my grandson Zaire’s 7th birthday.  On a pleasant fall day, busses marked with the names of cities from across the country again lined the streets of Washington, D.C. as on August 28, 1963. Attending this dedication was an opportunity to give tribute to Dr. King’s legacy, be inspired to continue his course, and reflect on that day and time.   Although Dr. King’s dreams are not yet fully realized, his tireless leadership and ultimate sacrifice to bring a nation together will never be diminished as long as I and future generations remain committed and steadfast in the pursuit of the type of society Dr. King envisioned.  We must and we will keep the dream alive.