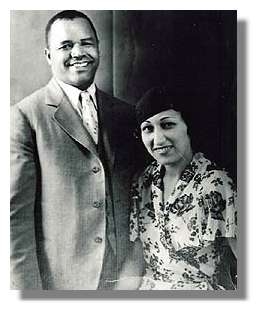 Born in 1900, in Philadelphia, Pennsylvania, Effa Brooks began her life in controversy. Her mother, Bertha Brooks, a white woman married to Benjamin Brooks, a black man, claimed Effa resulted from an affair with her white employer, John Bishop. There is no other evidence to corroborate Effa’s paternity, however, Benjamin Brooks filed and prevailed in a lawsuit against John Bishop for alienation of his wife’s affections. Effa, believed her mother’s claim and noted Bishop as her father throughout the duration of her life.

Growing up with her biracial siblings and a black stepfather, Effa Manley continually walked the line between black and white. Sometimes defined by others as black, sometimes as white, Effa used her ambiguous status to her advantage. As a young adult she worked, as a white woman, in a department store in New York City, though she lived in predominantly black neighborhoods and married black men.

Her second marriage of four was the lengthiest. Abraham Manley, whom she met at the 1932 World Series, was a “numbers banker” and at least fifteen years her senior. They remained married until Abraham’s death in 1952.

The Manleys lived in Sugar Hill area of Harlem, with the social elite of the African American community. They participated in social activism. As treasurer for the New Jersey chapter of the National Association for the Advancement of Colored People (NAACP), Effa used Eagles games as opportunities for fundraisers, including an anti-lynching day. They also supported a successful boycott of Blumstein’s department store in Harlem in 1935.

After the integration of major league baseball in 1947, the Negro League teams knew their time was limited. The Manleys sold the Eagles in 1948, but not before trading Larry Doby, the second player to integrate MLB, to the Cleveland Indians. Effa required that the Indians pay her for Doby’s contract, setting a precedent for Negro League players going into the majors.

In 1976, Effa co-authored Negro Baseball … before Integration, about notable Negro League players. She died in Los Angeles, California in 1981. In 2006, Manley was elected as an executive/pioneer to the Baseball Hall of Fame.