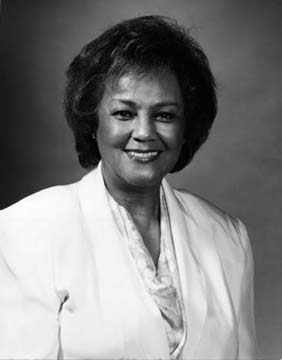 In 1942, Jewel Stradford graduated from Oberlin College, receiving her bachelor’s degree in political science. That same year she became a founding member of the Congress of Racial Equality. Stradford attended the University of Chicago Law School and in 1946 became the first African-American woman to receive a J.D. from that institution.

In 1946, Stradford married John W. Rogers, a juvenile court judge.  The couple had a son, John W. Rogers Jr., who later became the founder of Ariel Capital Management, the largest black-owned investment firm in the nation.  Jewel and John Rogers divorced in 1961.  Later that year she married H. Ernest Lafontant, who died in 1976. She remarried in 1989, this time to Naguib S. Mankarious.

In 1947, Jewel Rogers was admitted to the Illinois Bar, and soon afterwards, she began working for the Legal Aid Bureau of Chicago. However, she was not permitted to join the Chicago Bar Association because of her race.  Over the next decade, Rogers handled more than three thousand cases as a trial lawyer, providing free legal representation for her clients.  During this period she was also an officer in the Chicago chapter of the National Association for the Advancement of Colored People (NAACP) and on the board of the American Civil Liberties Union.

In 1955, President Dwight Eisenhower named Rogers assistant U.S. Attorney for Illinois. She was the first African American woman to serve anywhere in the nation in that capacity and held the position until 1958.  In 1960, Rogers seconded Richard Nixon’s nomination for the Presidency at the Republican National Convention.

In 1963, Rogers won her first case before the U.S. Supreme Court, the State of Illinois vs. Beatrice Lynn.  Although a Republican, Rogers was a member of President Lyndon Johnson’s Council on Minority Business Enterprise between 1965 and 1967.  She received a third presidential appointment in 1972 when President Richard Nixon named her Deputy Solicitor General, a position she held until 1975. In 1989, President George H.W. Bush appointed her Ambassador-at-Large and U.S. coordinator for refugee affairs in the U.S. State Department.  She served in that post until 1993.

In 1993, Rogers, then Mankarious, became a partner with the Holleb & Coff law firm in Chicago where she practiced corporate law, labor and employment law, and international relations law. She also served on the Boards of Trustees of Tuskegee Institute, Harvard University, and Oberlin College and on a number of corporate boards including Revlon, Mobil Oil, and Trans World Airlines (TWA).

Jewel Stradford Rogers Lafontant-Mankarious died in Chicago of breast cancer on May 31, 1997 at the age of 75.