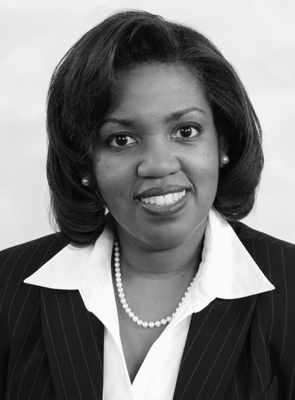 Denise Majette, former member of Congress, attorney, judge, and politician, was born in Brooklyn, New York on May 18, 1955 to Voyd Lee and Olivia (Foster) Majette.  In 1976, Majette graduated from Yale University.  She earned her law degree from Duke University, Durham, North Carolina in 1979.

After graduating, Majette joined the Legal Aid Society in Winston-Salem, North Carolina.  During this period, she also served on faculty at the Wake Forest Law School. Majette relocated to Stone Mountain, Georgia in 1983.  During the early 1980s, she held positions as a clerk and an assistant to judges.  From 1989 to 1992, Majette returned to private practice as a partner in the Atlanta law firm of Jenkins, Nelson, and Welch.  During this period, she also served on the boards of various community organizations.  In 1992, she was named an administrative law judge at the Georgia state board of workers’ compensation.  The following year, Georgia Governor Zell Miller appointed her judge of the State Court of DeKalb County.  Majette held the judgeship for nine years.

Majette resigned from her judgeship in 2002 to run for the U.S. House of Representatives in Georgia’s 4th congressional district.  In a major upset, she defeated five term incumbent Cynthia McKinney in the Democratic primary.  Majette was helped by Rep. McKinney’s charge that President Bush deliberately ignored pre-September 11 intelligence reports indicating a terrorist attack was imminent.  Capitalizing on those charges and an endorsement from Zell Miller who was then a U.S. Senator, Majette won 58% of the vote in the Democratic Primary against McKinney and 77% of the vote in the general election against Republican opponent Cynthia Van Auken.

After only one term in Congress, Majette decided to run for the U.S. Senate seat that was being vacated by Senator Miller.  She defeated millionaire businessman Cliff Oxford in the Democratic primary and became the first woman to be nominated for a U.S. Senate seat in Georgia.  She lost in the general election to Republican Congressman Johnny Isakson.  After completing her term in the House in January 2005, she re-entered the private law practice in Atlanta.

In 2006, Majette announced her decision to run for School Superintendent of Georgia.  She won the Democratic primary by a large margin but was defeated in the general election by Republican incumbent, Kathy Cox.

Majette and her husband, Rogers Mitchell, Jr., have two sons and reside in Stone Mountain, Georgia.