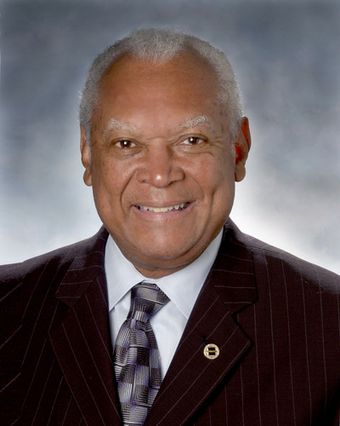 Civic leader, civil rights advocate, and police commissioner John Wesley Mack was born on January 6, 1937 in Kingstree, South Carolina, to Abram Mack, a Methodist minister, and Ruth Wynita, a school teacher. Shortly after he was born, his family moved to Darlington, South Carolina. Mack attended North Carolina Agricultural and Technical State University (NC A&T) located in Greensboro, North Carolina. He headed the student chapter of the National Association for the Advancement of Colored People (NAACP) on campus. Mack earned a bachelor’s degree in applied sociology there in 1958. Two years later, he received a master’s degree in social work from Clark Atlanta University.

In 1960, Mack and his parents moved to Oxnard, California. He spent four years as a psychiatric social worker at Camarillo State Hospital. In 1964, he went to Flint, Michigan, and served as executive director of the Flint Urban League. Here he devoted his work mostly to fair housing and voter registration issues. In 1969, the League sent him to Los Angeles, California, where he became president of the Los Angeles Urban League. Mack transformed the Urban League from relative obscurity to a center of black power, fighting against school segregation and the poor treatment of African American workers in the city.

In 1977, Mack co-founded and became chair of the Los Angeles Black Leadership Coalition on Education. He served as vice president of the United Way Corporation of Council Executives in the early 1980s.

In April, 1992, riots occurred in South Central Los Angeles following the acquittal of four white police officers who beat African American Rodney King.  Mack joined Rebuild LA established by Mayor Thomas Bradley after the rioting. The agency secured $380 million in investment from several companies, guided the renovation of 63 percent of the damaged businesses, and created jobs for a large number of unemployed and underemployed residents. After Rebuild LA disbanded in 1997, Mack helped guide the redevelopment of the Crenshaw district in South Central Los Angeles.

Mack retired as head of the Los Angeles Urban League in 2005. In the same year, Mayor Antonio Villaraigosa appointed him president of the Board of Police Commissioners of the Los Angeles Police Department, where he became the fourth African American to hold this position.  Under Mack’s leadership, the commission secured improvements in the police department, including video cameras in squad cars to increase accountability among patrol officers. Mack also forged a strong bond with Police Chief William J. Bratton. Together, they enacted major reforms required under a federal consent decree issued by the United States Department of Justice in 2000.

In 2013, Mack left the police commission and the following year Mayor Eric Garcetti appointed him to the Los Angeles City Planning Commission. While here he obtained more affordable housing in major development projects.

Mack received awards from several prominent organizations. Among them were the National Urban League, Southern Christian Leadership Conference, and the NAACP Legal Defense and Educational Fund.

John W. Mack died of cancer at Cedars-Sinai Medical Center in Los Angeles on June 21, 2018 at the age of 81. He was survived by three children.