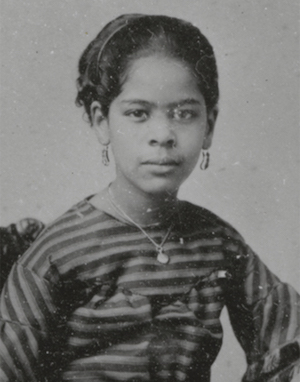 Maritcha Remond Lyons, an African-American teacher and civil rights activist, was born in New York City, New York to Albro Lyons Sr. and Mary Joseph Lyon on May 23, 1848. She was the third of five children in the free black family. To avoid the danger from draft riots in New York City, Maritcha’s parents sent their children to Providence, Rhode Island, during the Civil War.

In 1865 at age sixteen, Maritcha was denied entry to Providence High School due to her race. Her family joined the campaign for desegregation in the state, led by prominent black abolitionist George T. Downing. Maritcha testified before the state legislature, and the school was ultimately desegregated. In 1869 she became the first black graduate of Providence High School.

Shortly after graduation, Lyons began her lengthy teaching career. In October of 1869, she accepted a position at Colored School No. 1 in Brooklyn, New York. After nearly thirty years teaching, she switched to the integrated Public School No. 83 in 1898. There, she served as assistant principal. Lyons’s responsibilities included supervising practice teaching, making her the second African American in New York City’s public schools to train teachers.

While teaching, Lyons often dedicated her evenings to further education. She spent ten years studying music and languages at the Brooklyn Institute. Lyons also developed her public speaking skills and spoke in favor of expanding civil rights. She involved herself in Ida B. Wells’s anti-lynching campaign and founded the White Rose Mission, a home that offered refuge to migrants from the West Indies and the American South.

In 1926 Hallie Quinn Brown published Homespun Heroines and Other Women of Distinction, which featured eight biographical sketches written by Lyons. Although she would never publish it, Lyons wrote an autobiography. Long after her death, Maritcha: A Nineteenth-Century American Girl (2015) was published based on her unpublished memoir.

Lyons never married or had children; instead she lived with various family members. For her parents’ last years, she joined her brother in moving in with them. Later, Lyons would live with her orphaned nephew. Maritcha Lyons passed away on January 28, 1929, in Brooklyn at the age of 80, leaving behind a rich legacy from her forty-eight-year teaching career.