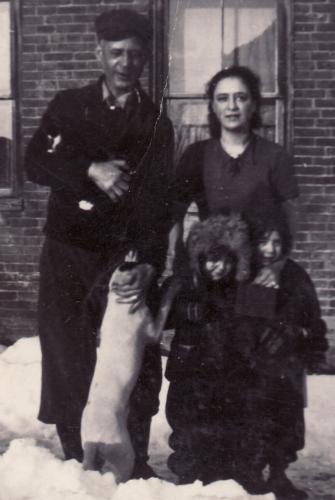 John Ralph Lyons was born February 22, 1888 in Lewistown, Mifflin County, Pennsylvania to James Levi and Harriet (Baptist) Lyons.  His father was a barber and musician.  He had four brothers and two sisters, and his mother died in childbirth when he was a teenager.  His great-grandfather, Benjamin Lyons (ca 1780-1859) was a runaway slave who settled in Salemville, Bedford County, Pennsylvania around 1825.

John Ralph Lyons served in the U.S. Army, 10th Cavalry, Troop D, for six years, the last four at Fort Ethan Allen in Colchester, Vermont.  He was awarded the Silver Lifesaving Medal on July 6, 1911, “for bravely rescuing a companion” at Mallets Bay in Colchester, Vermont.  After discharge from the 10th Cavalry in 1914, he rejoined the Army in 1917, enlisting in Company F, 807th Pioneer Infantry, which served overseas during World War I.  After the war he worked as a civilian barber at Fort Ethan Allen.

John “passed for white” around 1918 when he married Elizabeth Connell of Dover, New Hampshire.  Lizzie, as she was called, emigrated from Ireland in 1894, and they raised six daughters and two sons in Winooski and Burlington, Vermont.  During the last years of his life, he worked for the American Woolen Mill in Winooski, Vermont.

John Ralph Lyons died suddenly at home in Winooski on March 16, 1941, after being kicked in the chest by a mule while hauling coal for the American Woolen Mills.