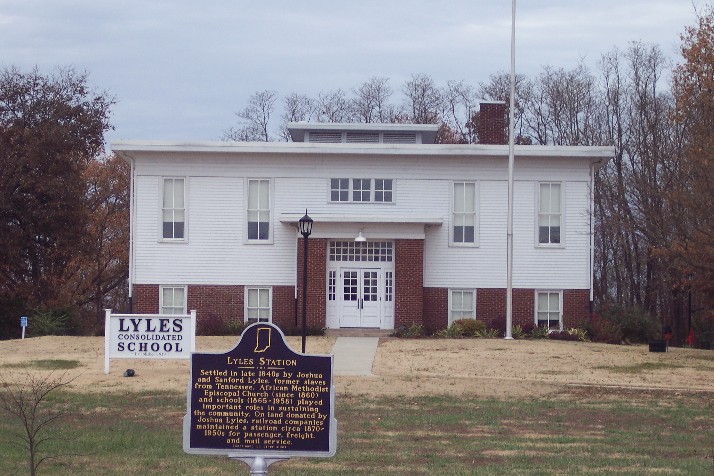 Lyles Station, Indiana, is a community of African Americans located about five miles west of Princeton, Indiana, in Gibson County. It flourished from about 1880 to 1913, when it boasted an independent, self-sustaining community of about 800 black residents.

The roots of Lyles Station began around the 1840s when two free African Americans from Tennessee, Joshua Lyles and his brother Sanford Lyles, purchased land near the Wabash, White, and Patoka Rivers in southwestern Indiana with help from local Quakers. They and their families improved and farmed the land, so that by the Civil War their holdings consisted of hundreds of acres. Other newly relocated blacks joined them. According to tradition, Lyles aided fugitive slaves coming north from Tennessee during the antebellum period, offering them a safe haven to either settle in or to rest until they continued on to other locations on the Underground Railroad. The community was then known as the Switch Settlement.

Around 1860, the settlement established its first church, the Hardshell Baptist Church. The community’s first school, a subscription school, was founded in 1865 and met in the same cabin as the church. The school was later moved to a three-room building before being replaced by a larger school in the twentieth century.

After the Civil War and emancipation, the community’s population rapidly increased as former slaves from Tennessee came north, joined by migrants from northern cities. Joshua Lyles continued to act as a booster for the community. In 1870, Lyles donated land to the Old Airline Railroad to establish a train station on the Louisville, Kentucky-to-St. Louis, Missouri line. The station built in the area of the community was named after Joshua Lyles in 1886 shortly after his death, and the settlement became known as Lyles Station.

As a result of the railroad’s presence, more and more African American families settled in the area. In 1887, a second church, Wayman Chapel African Methodist Episcopal (AME) Church, was organized by its residents. Unlike many AME churches in the nineteenth century, Wayman Chapel was not founded by one of the AME’s missionaries, but by its own congregation. By the early twentieth century, Lyles Station’s 55 households boasted 800 residents, an elementary school, two churches, two general stores, a lumber mill, and a post office.

In 1913, however, the Patoka and Wabash rivers flooded, leaving much of Lyles Station under water. After this catastrophe, the community’s population and prosperity began to decline. After the end of World War I, the Lyles Consolidated School was built for the community’s children; due to dwindling enrollment, it closed in the late 1950s, but was reopened in 2003 as a museum. In 1999, it was added to the National Register of Historic Places.

The community is still home to about half a dozen families, many of them descendants of the original nineteenth-century settlers.