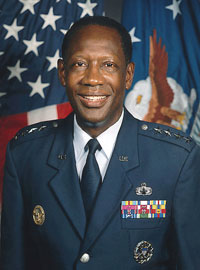 Air Force General Lester Lyles was born on April 20, 1946, in Washington, D.C. He attended public schools in the District and then in 1968, he received a Bachelor of Science degree in Mechanical Engineering from Howard University. While at Howard he joined the Air Force ROTC program and upon graduation in 1968, became a Second Lieutenant in the U.S. Air Force.  Lyles then went to New Mexico State University, Las Cruces, to receive a Master of Science degree in Mechanical and Nuclear Engineering in the Air Force Institute of Technology Program. In 1980, he attended the Defense Systems Management College in Fort Belvoir, Virginia, the Armed Forces Staff College at Norfolk, Virginia, in 1981, and then the National War College of Fort Lesley J. McNair in Washington, D.C. in 1985.

Lyles’s first assignment as an Air Force officer came in February 1969 to November 1971, where he was a propulsion and structures engineer in the Standard Space-Launch Vehicles Program Office at the Los Angeles Air Force Base in El Segundo, California. He held that post until 1971. Over the course of his 35- year career in the U.S. Air Force his 19 assignments varied from Program Element Monitor of the Short-Range Attack Missile at the Air Force Headquarters to Special Assistant and Aide-De-Camp to the Commander of Air Force Systems Command. In 1999, he was promoted to General and became the Vice Chief of Staff at the Air Force Headquarters. His last assignment was as Commander of the Air Force Materiel Command at Wright-Patterson Air Force Base in Ohio from 2000 to 2003, when he retired as a General.

General Lyles continued to be active after his retirement from the military. In 2009, he served on the Review of U.S. Human Spaceflight Plans Committee, chaired the National Research Council’s Committee on the Rationale and Goals of the U.S. Civil Space Program, and was appointed to the Defense Science board. From 2009 to 2013, he was appointed by President Barack Obama to the President’s Intelligence Advisory Board. In 2011, he was elected to the National Academy of Engineering. He was appointed to the Secretary of State’s International Security Board in 2013. Beginning in 2010, he chaired the Aeronautics and Space Engineering Board of the National Academy of Engineering until 2016. Currently, he is a member of the NASA Advisory Council, a position he has held since 2005. General Lyles is also on the Board of Directors for General Dynamics Corporation, KBR Corporation, Battelle Memorial Institute, and United Services Automobile Association.