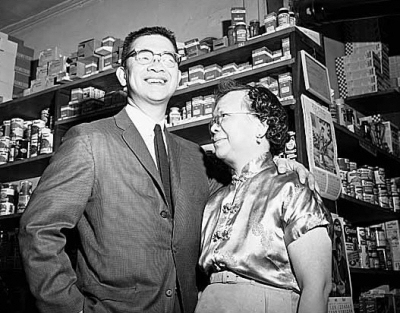 Wing Chong Luke is a pioneer in Asian American politics. In 1962, at the age of 37, Luke, despite an active smear campaign, became the first person of Asian ancestry elected to public office in the Pacific Northwest and the first person of color elected to the Seattle City Council.  Prior to his election, Luke served as an Assistant Attorney General for the State of Washington.

Throughout his career, Luke fought for Indian fishing rights, fair land and employment laws, historic and cultural preservation of the Pike Place Market, Pioneer Square, the schooner Wawona, and the Seattle waterfront. Most of all, Luke fought for civil rights to improve the quality of life for all people.  He was particularly involved in the campaign to end racial discrimination in housing in the early 1960s, both as Assistant Attorney General and as a member of the Seattle City Council.

In 1963 as the only non-white member of the City Council, Luke introduced the city’s first open housing legislation, and one of the first laws of its type in the nation, that allowed people of color to live in any part of the city they wanted to and could afford.  Although this measure was repealed in a bitterly fought referendum the next year, it initiated a much wider civil rights and political campaign that would eventually make Seattle one of the most racially integrated cities in the nation by the 1980s.

During WWII, Luke served in the U.S. Army.  Soon afterwards, while he was serving in the military, his family was forced out of their Roosevelt laundry business/home when the landlady tripled the rent.  This incident deeply offended Luke and affirmed his commitment to work for social justice.

Luke was admired for his intelligence and wit.  According to a 1965 Argus poll, in which he earned an 80 percent approval rating, Luke was the most popular local politician and was actively touted for mayor.  Unfortunately, his promising career ended at age 40 in a plane crash in the Cascade Mountains. The Seattle Public School’s Wing Luke Elementary School and the Wing Luke Asian Museum– a Smithsonian affiliate and the only Pan-Asian American museum in the nation– preserve his ideals and legacy.