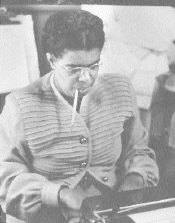 Lucile Bluford was a pioneering black journalist who sought to integrate the University of Missouri in 1939, shortly after the National Association for the Advancement of Colored People’s (NAACP) test case centering on Lloyd Gaines, Gaines v. Canada, stalled when Gaines mysteriously disappeared.  Although Bluford never gained admittance to the University of Missouri, she demonstrated the readiness of young black professionals to challenge Jim Crow in the mid-20th century.

Born in North Carolina in 1911, Bluford grew up in Kansas City, Missouri where her father, John Henry Bluford, taught in the state’s segregated public school system.  As a high school student, Bluford was an enthusiastic young journalist, editing her school newspaper and writing a youth column for the black-owned newspaper Kansas City Call, where she met then-editor Roy Wilkins, later Secretary of the NAACP.  Segregation laws prevented Bluford from applying to the University of Missouri’s program in journalism.  To avoid creating expensive segregated professional training programs for African Americans, Missouri and many other southern states provided subsidies for the handful of black college students who had the resources to attend colleges and universities in other states.  Bluford used a partial tuition subsidy from Missouri to enroll in the journalism program at the University of Kansas, graduating with a BA in journalism in 1932.

Bluford was working as an editor for the Call in 1935 when Lloyd Gaines began his test case to gain admittance to the University of Missouri’s School of Law.  The NAACP had begun a concerted effort to overturn Jim Crow in the South during these years, including challenging out-of-state tuition programs as inequitable. After Gaines’s application for enrollment was denied on the basis of race, NAACP lawyers pursued his case up to the Supreme Court which ruled in 1938 that Missouri must provide equal educational opportunities within the state for African Americans.  Yet while waiting to enroll in the University of Missouri, Gaines vanished.

As a member of the NAACP, Lucile Bluford was well aware of the significance of the Gaines decision and applied to the University of Missouri’s School of Journalism even before Lloyd Gaines’ disappearance. A writer in the NAACP’s journal, The Crisis, proudly described her in these years as “a modern, intelligent young woman, self-assured, yet modest, with plenty of initiative and the proverbial ‘nose for news.'”  Yet not surprisingly, the University of Missouri rejected Bluford’s application and NAACP lawyers took up her case.  Local courts repeatedly ruled against her on technical reasons and the state stalled by directing Lincoln University, a local university designated for African American students, to offer graduate education in journalism.  Bluford refused to enroll in the new Lincoln program, arguing that she was more experienced in journalism that the Lincoln instructors.  But Bluford’s case was more seriously stalled by World War II as the University of Missouri closed its journalism program temporarily.

Bluford continued to work as a journalist with the Kansas City Call but the campaign to integrate the state’s public universities would be taken up by others.  The first black student was admitted to the University of Missouri in 1950 and not until the 1980s did the University acknowledge Bluford’s efforts.  In 1984, the School of Journalism awarded her an award for her years in journalism, and by 1989 the University of Missouri granted her an honorary doctorate in the humanities.  Ultimately, the active role played by Bluford and countless other young African Americans suggests the importance of grass roots activists within the NAACP legal challenges to Jim Crow.