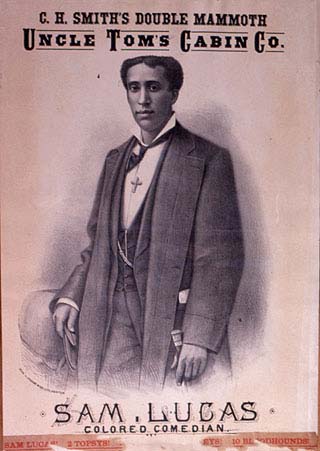 Sam Lucas, one of the most respected and celebrated entertainers of his time, is credited with breaking barriers for black actors and becoming the first African American actor to star in a “white” feature film. Lucas is best remembered for his comic and dramatic roles performed on the minstrel circuit and Broadway stages, and by the end of his career, a major motion picture.

Lucas was born Samuel Mildmay in Washington, Ohio in 1840. He began singing and playing the guitar as a teenager and went on to establish a reputation as a performer while working as a barber. After the Civil War when African American performers (in blackface) were allowed to work in minstrel shows, Lucas joined traveling black companies and sang on the Ohio River steamboats. Lucas built a reputation as the best all-around entertainer in the business and was empowered to select his own shows which allowed him to star with the most successful black minstrel companies as a comedian and singer.

Dissatisfied with limited minstrel roles, Lucas attempted to establish himself as a serious actor by appearing in dramatic plays during the mid 1870s. By 1878, he became the first black man to appear as the title character in the serious stage production of Harriet Beecher Stowe’s Uncle Tom’s Cabin. At the age of 73, the veteran actor capped his career when he recreated the role of Uncle Tom in the 1914 film version released by World Film Corporation as well as two comedy shorts made as Tom. Lucas is believed to be the first African American actor to appear as Uncle Tom during the era. Shortly after completing the film, Lucas died after suffering a long bout of liver disease.