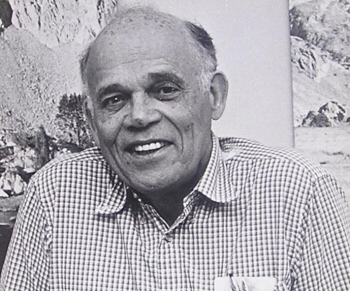 Olympic athlete and scientist James Ellis Lu Valle was born in San Antonio, Texas on November 10, 1912 but grew up in Los Angeles where he made use of a library card even before entering elementary school. Academics was always uppermost in his mind despite the fact that as a track star at the University of California at Los Angeles – and not on athletic scholarship – he won the bronze medal in the 400-meter dash at the historic 1936 Olympics in Berlin, Germany. Upon graduating Phi Beta Kappa, Lu Valle was elected the first president of UCLA’s Graduate Student Association and earned his master’s degree in chemistry. Studying under the renowned Linus Pauling, Lu Valle obtained his doctorate at the California Institute of Technology in 1940 then briefly taught chemistry at Fisk University.

From 1941 to 1953 Lu Valle was employed as a chemist doing research on color photography for the Eastman Kodak Company, thus becoming the first African American in its laboratories. Subsequently, he worked on research projects at Technical Operations Inc., Fairchild Camera & Instrument Corporation, SMC Corporation, and Smith Corona Marchant Laboratories. An expert in electron diffraction, photochemistry, magnetic resonance, solid state physics, and neurochemistry, and the chemistry of memory and learning, from 1975 until he retired in 1984 Lu Valle was laboratory administrator for the chemistry department at Stanford University.  In March 1985 he was paid the unique honor of having the new student center at UCLA named “Lu Valle Commons.” He died January 30, 1993 in Te Anau, New Zealand.