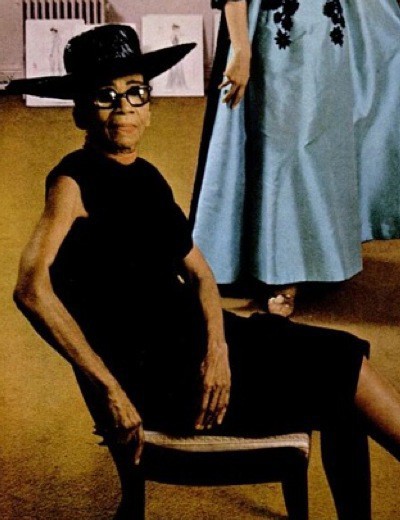 Ann Cole Lowe was the first African American to become a noted fashion designer. Lowe’s one-of-a-kind designs were favored by wealthy and socially prominent women from the 1920s to the 1960s. In 1953, Lowe designed the ivory silk taffeta wedding dress worn by Jacqueline Bouvier when she married John F. Kennedy.

Lowe was born in Clayton, Alabama in 1898 although the specific date is unknown.  Lowe was a great-granddaughter of a skilled seamstress slave and a white plantation owner. Her mixed-race grandmother, Georgia Tompkins, was given her freedom after being purchased by a freeman named General Cole. Ann learned to sew from Georgia and from her mother Janey Lowe, who made dresses for Southern society women. Janey Lowe died in 1914 when Lowe was sixteen. At the time of her death Janey Lowe was working on four ball gowns for the First Lady of Alabama, Elizbeth Kirkman O’Neal. Lowe finished the dresses.

In 1912 when she was fourteen, Lowe married Lee Cohen with whom she had a son, Arthur Lee. Lowe’s husband wanted her to give up working as a seamstress but she left him after she was hired to design a wedding dress for a woman in Florida. In 1917, 19-year-old Lowe and her son moved to New York City, New York where she enrolled at St. Taylor Design School. The segregated school required Lowe to attend classes in a room alone. After graduating from St. Taylor Design School in 1919, Lowe and her son moved to Tampa, Florida. The following year, she opened her first dress salon “Annie Cohen.” In 1928, Lowe returned to New York City after saving $20,000 of her earnings. While there she began to work on commission for Neiman Marcus, Saks Fifth Avenue, Henri Bendel, Chez Sonia, and other prominent retailers.

In 1946, Lowe designed the dress that actress Olivia de Havilland wore to accept the Academy Award for Best Actress. In 1950, Lowe and her son open a second salon called Ann Lowe’s Gowns, on New York City’s Lexington Avenue. Here Lowe created designs for some of the most prestigious families in the nation including the Rockefellers, the Lodges, the DuPonts, the Posts, and the Biddles. In 1953, she was hired to design a wedding dress for Jacqueline Bouvier for her wedding to Massachusetts Senator John F. Kennedy. Lowe was chosen by Jacqueline’s mother Janet Auchincloss, who previously commissioned Lowe to design the wedding dress she wore when she married Hugh D. Auchincloss in 1942. The wedding dress was widely admired at this highly publicized social event.

Throughout her career, Lowe worked for wealthy clients who often persuaded her to charge hundreds of dollars less for her work than her competitors.  Eventually in 1962, she lost the salon in New York City after failing to pay taxes. That same year, her right eye was removed due to glaucoma.  Lowe also developed a cataract in her left eye which was saved by surgery. In 1968, at the age of 70, Lowe opened a new store called Ann Lowe Originals, on Madison Avenue.  She retired two years later in 1972.

Lowe was married twice.  Her son by Lee Cohen, Arthur Lee, was Lowe’s business partner from the 1930s until his death in 1958. Lowe married a second time but that marriage also ended in divorce. As a single woman, Lowe later adopted a daughter, Ruth Alexander.