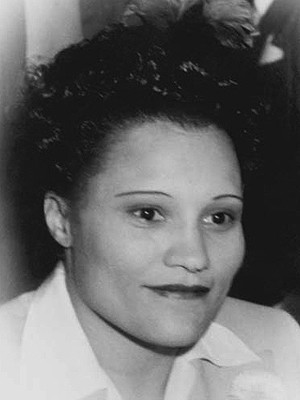 Lovie Louise Yancey was the African American founder of the Fatburger restaurant chain. She was born in Bastrop, Texas, on January 3, 1912, one of eight children of Clayborn and Minnie Yancey. Very little is known about her early life in Texas. Yancey and Rawlings Colquitt Green had a daughter, Gwendolyn Green, in 1931.

Yancey and her daughter moved to Los Angeles in the mid-1940s. At the age of thirty-five, she and her friend, Charles Simpson, decided to partner in a business venture. Simpson built a three-stool hamburger stand on Western Avenue, near Jefferson Boulevard in South Central Los Angeles in 1947, with scrap materials from his place of employment. They called the business Mr. Fatburger.

That first burger stand became so successful that Yancey and Simpson opened three more locations over the next five years. In 1952, when the two decided to end their partnership, Simpson and his wife took control of the other Mr. Fatburger locations while Yancey retained ownership of the original business.  She dropped the “Mr.” and the original Fatburger was born. From the beginning, Yancey was a daily part of the business. She worked up to sixteen hours a day at times to ensure things ran smoothly and the burgers were cooked “just right.”

In 1973 Yancey opened a Fatburger on La Cienaga Boulevard in Beverly Hills, which became a popular place for entertainers such as the comedian Redd Foxx, singer Ray Charles, and others to custom order their burgers. By 1980 Yancey began to grow the business through local franchising and by the end of 1985, the chain had over fifteen franchise sites throughout southern California. In 1986 Fatburger was named number five among the fastest growing burger franchise chains by Entrepreneur magazine in its annual Franchise 500 list, trailing behind the likes of McDonald’s, Burger King, and Wendy’s.

Over the years, Fatburger has been immortalized in a string of songs, movies, and TV shows, including the sitcom Sanford and Son, the film The Fast and the Furious, and the Ice Cube single, “It Was a Good Day.” Fatburger even once made Late Night talk show host David Letterman’s Top 10 list of things he’d miss most about leaving Los Angeles. Eventually, Yancy encouraged celebrities, including Queen Latifah, Kanye West, and Pharrell Williams, to open Fatburger franchises.

Beyond her Fatburger legacy, Yancey also established a $1.7-million endowment at the City of Hope National Medical Center in Duarte, California, in 1986 for research into sickle-cell anemia. She created the endowment in dedication to her twenty-two-year-old grandson, Duran Farrell, who had died of the disease three years earlier.

Lovie Yancey died of pneumonia on January 26, 2008, at the age of ninety-six at the Olympia Medical Center in Los Angeles, California. She is survived by her daughter Gwen.