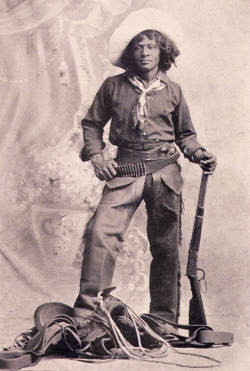 Born the son of slaves in Davidson County Tennessee in 1854, Nat Love grew up during the turbulent Civil War and Reconstruction era.  Rare for African Americans born enslaved in that era, Love learned to read and write as a child.  In 1869 he left Tennessee and moved west to Texas.  For the next 20 years Love worked as a drover, moving cattle and horses in various locales including the Texas Panhandle, Kansas, Arizona Territory and Dakota Territory.

In 1889, Love married a woman named Alice and the couple had one child.  In 1890 he began work as a porter for the Denver and Rio Grande Railroad, a job he held for the next fifteen years.  As Love recounted his stories of his earlier life as a drover to both passengers and other railroad workers, he was encouraged to write his life history.  He did so in 1907 in an autobiography titled The Life and Adventures of Nat Love Better Known in the Cattle Country as “Deadwood Dick.”

Love bragged about his exploits as a superior cowboy and rodeo performer and recounted how he earned the name “Deadwood Dick” along with the love and respect of the citizens of Deadwood, Dakota Territory.  Love’s account describes his meeting legendary westerners such as “Buffalo Bill” Cody.

In the 1890s Edward L. Wheeler, a dime novelist, wrote more than thirty books about a hero named “Deadwood Dick.”  Love claimed that these novels were about him, placing his accounts similarly with those of the protagonist of the “Deadwood Dick” series.

Though Love’s autobiography contains numerous hyperboles and exaggerative claims, it does offer an insight into life of one man in the 19th century American west.

Nat Love died in Los Angeles, California at the age of 67.